It's been over a week since my last post, and that's because life's been busy! I joined a softball league for the summer and our first game was last Wednesday. I haven't played since high school (nine years) so my body was sore for days after, but it was a lot of fun. So much fun that I never bothered to find out if we won, which was the first thing Darrin asked me when I got home. Thursday was spent enjoying a dinner at church bells' practice. We performed 4 songs last Sunday at church. One song used a technique called singing bells, which is when you rotate a wooden dowel around the outside of the bell to make it sing. It's kinda like playing the water glasses with the tips of your fingers. Friday was scrapbooking/Wii night with our best friends. It's a weekly tradition. This week we broke down and bought a Cricut for scrapbooking. It's a little machine that cuts out die letters and shapes for our pages. This weekend was spent catching up on reading, yard work, and quilting. I've got my April UFO almost done for my online quilt group. All that I need to do is attach the binding. 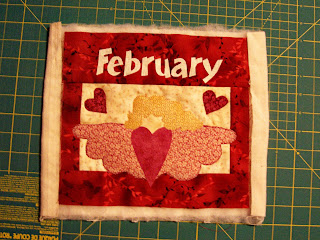 Ian's been sick this weekend with a raspy cough in his chest. He's started saying please when we he wants more to eat and he puts his arms up in the "so big" pose and says touchdown. It is so cute. Hopefully the Packers will have lots of touchdowns come September so he can put it to use. He had a blast today playing with all the fabric I had lying around; pulling it out of the containers and spreading them all over the couch. We had spaghetti tonight, and he still refuses to eat marinara sauce. I'll leave you with my favorite picture from this week. 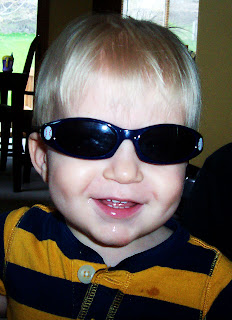 It really has been a busy week for you. I fear this week is going to be the same for me. I'm looking forward to sewing tonight. Good luck finishing your April UFO.