It was a few days early, but Ian gave Darrin his Father's Day present today. He got him Mario Kart for the Wii. It took quite a bit of hunting to come up with it, and I got the last one Wal-Mart had. He's busy playing it as I type this. He's taking advantage of the Wi-Fi connection and playing against people from all over the US. It's pretty darn cool.

Ian and I went to the zoo again this morning. Didn't stay too long, as it was starting to get crowded. The College World Series starts this weekend, and that part of town gets taken over by all the baseball people, so no more trips for awhile. It's actually the perfect time for it because we have VBS all next week at church, and the following week Ian will be staying with his grandparents as Darrin and I are going to Montana with Marlena and Noah. Ian enjoyed the tigers today at the zoo, just watching them walk from one side of their cage to the other. 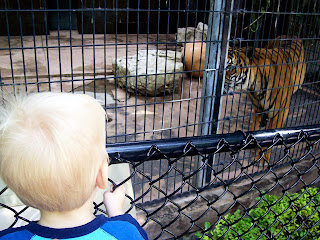 We had pancakes for dinner tonight, and Ian got in on helping make them. It's the first time we've had him "help" and he didn't like it so much when we took the batter away from him. 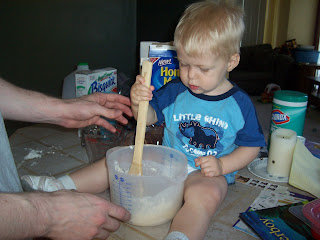 We bought Ian some Lego Duplo blocks recently and he isn't too keen on putting them together, but he loves taking apart what we build. He also loves piling them on the top of his slide. 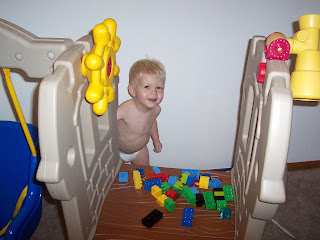 Last night we spent about 3 hours in the basement because the sirens were going off in town. We were lucky, but folks around us weren't. My prayers go out to those at the Scout Camp not far from here.
Posted by Colleen at 9:04 PM

My prayers are with you that you don't catch any really dangerous weather or flooding!