Week with Grandma and Grandpa

My parents left Tuesday after spending a week here with us. Ian loved having them here, mostly because they would do everything he wanted, but that's what grandparents are for. Ian quickly learned the word 'hat' while they were here. He would bring grandpa both grandpa's hat and his hat to show grandpa he wanted to go outside. They went on at least two walks every day. 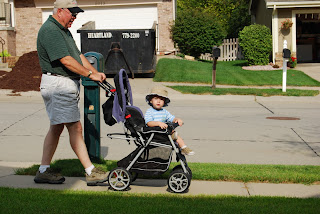 Their first night in town I had a softball game and they all came to watch. Ian met a girl who was passing out Lucky Charms to us on the team (we were behind in the final inning-and their luck worked). Ian was, of course, right next to her since she had food. I think he made a new friend. The crazy thing is that she's four, and I never would have guessed she was that old when they were standing next to each other. 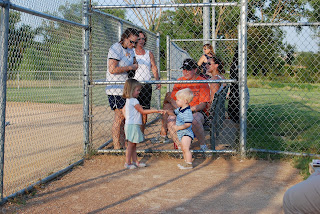 The next morning, Ian had to take his grandparents to his favorite place, the zoo. Ian went wild in the aquarium, bouncing from one side of the tunnel to the other to look at all the fish and sharks. Thank goodness they were there to chase after him! The weather was perfect for the morning out and the animals were all awake and active. It was a great day. 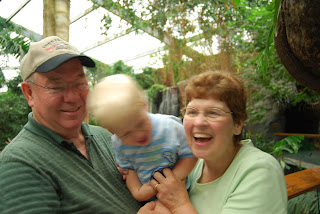 Ian spent every night out in the pool on the deck. He didn't care what he wore, either. He'd get in with his clothes on, his swimsuit, just swimmers, or nothing at all. He loves walking around in the pool and dumping water from one container to another. He doesn't mind the water getting dumped on him, either. So much time in the pool has carried over to the tub, though. He won't sit down, just wants to walk around. Might have to pull the ducky tub back out. 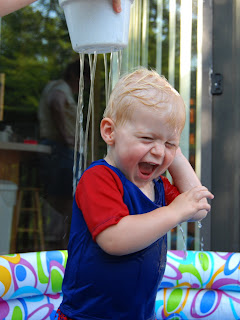 Ian also had his 18-month pictures while they were here. The pictures turned out okay, but Ian just doesn't show his trademark smile there because they want to pose him and he wants to do his thing. We have the benefit here of capturing him in the moment. Here were some of our favorites that they got. 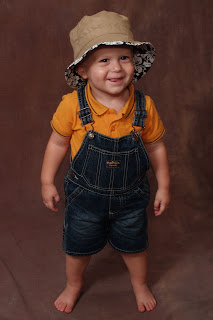 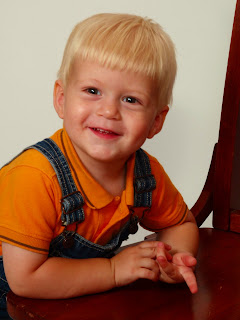 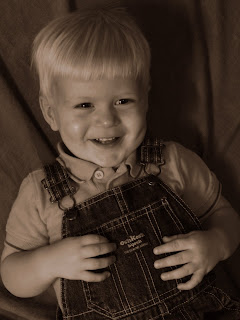 He is absolutely adorable. I am sure your parents enjoyed "spoiling' him during the visit.