Yesterday while Ian was down for his nap, I went sewing machine shopping. I went with the intent of just figuring out which one I wanted, so that I could buy it as soon as I lost my 4 pounds... but it's so hard to leave without a machine after you've tried it. I ended up buying a Janome Quilter's Companion Marie Osmond 200. 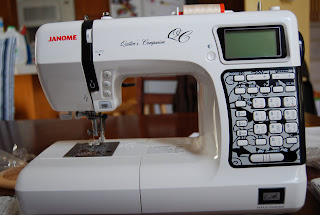 I did not buy it because M.O.'s name is on it (I'm way too young to know her from anything other than her fainting spell on Dancing with the Stars), but because it had the most features and quality for my price range. My favorite features are the needle-down, tie-off, and start/stop feature. I can't believe it's possible to sew without a pedal.


I didn't get much sewing done yesterday because Marlena and Noah had their annual pumpkin-carving party. Ian picked out his pumpkin and helped scoop the seeds out, but he got bored waiting for me to get it carved out and had more fun playing with the bocce balls and eating Noah's homemade marshmallows. He enjoyed checking out his pumpkin when it was all done. 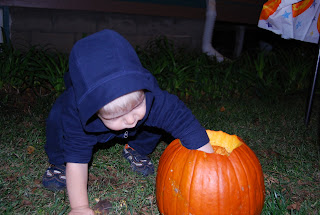 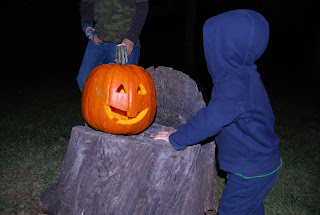 Today I got a chance to sew after all my errands were taken care of. I wanted to start something new with the new machine, and I worked on the block of the month for the quilt guild meeting tomorrow. I just joined last month, so I didn't have last month's done. I got both Sept. and Oct. done for the meeting tomorrow. The guild is celebrating its 20-year anniversary, and so our block of the month is the same one done 20 years ago. 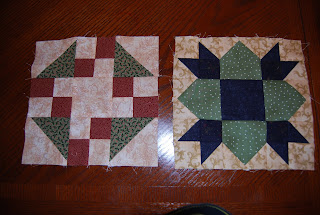 I got a quarter-inch foot with the machine, and it is so nice to use. The machine went over the seams without pulling them askew and started without wadding up the thread, both problems I was having on my old machine.
I wish I could go and start sewing on November's but I should probably get ready for the school week. It's parent/teacher conference week, which always proves to be a hectic week. Hopefully I'll get a chance to do a bit of sewing before heading home to see mom and dad this weekend.
Posted by Colleen at 7:34 PM

Congrats on your new machine! I have sewn on that one and it is really nice. I seriously wanted it, but was out of my "class machine" price range. I think you'll love it and it's a great machine from what I've heard. Hope you find time to sew during conferences week.

Congrats on the new machine - looks like you are already enjoying it and hopefully will have more time to soon.

I'm so glad you love your machine! It makes piecing and quilting so much easier and fun.