Marlena and I spent Friday night at Archiver's for Scrap Mania. You scrapbook from 5-11, with supper and a snack included in the price. I got four pages nearly completed for Ian's book, which is double my normal finish. I usually spend most of my time trying to figure out layouts, but I actually went in with a plan this time. The first layout I did was a two-page spread from our trip to Pooley's Pumpkin Patch. All it needs is a title and journaling and I'm done.

For the next page, I emailed Darrin earlier in the day and asked him what he loved about being Ian's dad. I then copy and pasted his response to be the journaling for pictures of Ian and him this summer. I just need to add the title. 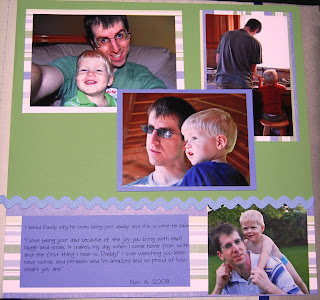 The last one is one of my favorite pages of all time. The picture is of Ian's first smile, which Darrin amazingly captured, and I love the layout. I also love the fact I used a color other than green or blue for the main color. This one is completely done. 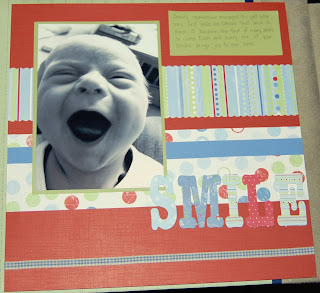 The rest of the weekend has been filled with lots of creativity,too. I'm nearly done with the middle part of the purple ocean waves blocks, and I spent 3 hours today at a friends stamping a stack of cards to use as inspiration for others.

Ian has been helping with his diaper changes for awhile; I say up and he pulls his legs up, and then I say down and he puts them down. Being the teacher I am, I said, "Up and down are opposites, Ian." Wouldn't you know, he spits out the word opposites- and it's actually pretty understandable. I also taught him "She'll be coming around the mountain." He adds the choo-choo perfectly, and even tries singing it himself- "She'll be comin' choo-choo." I am in constant amazement of how well he talks and how quickly he picks up on things. Now, if we could just get past the tantrums... those amaze me, too, but in a different way. Where does a child that age learn such aggression? I know he doesn't see it at home, and he's one of the oldest at day care, so I don't think he sees it there, either. I'll just be glad when he outgrows it.
Posted by Colleen at 9:21 PM