These last four days have been wonderful. We had three Thanksgivings filled with delicious food, and time spent with family we don't see very much. We took off from Omaha Wednesday night and spent Thursday noon eating with my dad's family. Ian shocked everyone with the amount of food he can eat, and he had a great time playing tractors with Connor. 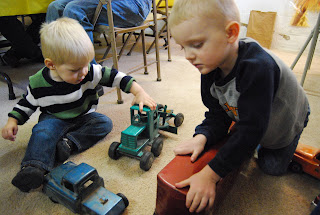 After eating with dad's family we had Thanksgiving dinner with my mom's family. My grandma has 24 grandkids and 6 great-grandkids, Ian being the youngest of them. We alternate years of all of us attending either Thanksgiving or Christmas. Because most of us (and all of the great-grandkids) won't be there for Christmas, we had Christmas early. Christmas at my grandma's is an epic event, and I wouldn't change it for the world. It begins with Santa stopping by and delivering presents to all of us, and ends with opening the presents grandma and others have for us. Ian got about 12 presents to open, and he quickly learned how to say the word Santa, although he didn't want to sit on his lap. This year he learned to pull the paper off the presents, but he still wasn't obsessed with figuring out what was in them. He got lots of books, play-doh, a "laptop," some clothes, and some vehicles. 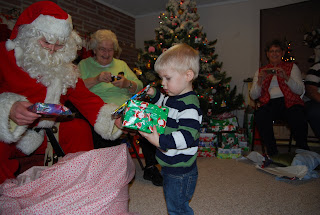 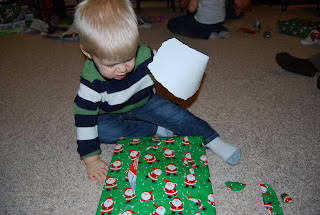 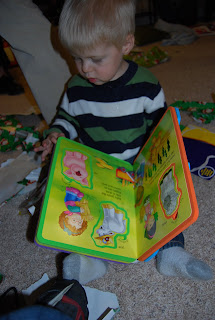 We spent the rest of the weekend enjoying time with extended family: eating breakfast with my dad's parents, lunch with my grandma, celebrating Brittney's birthday for dinner, and going to a cousin's engagement party for desserts.

We left after breakfast on Saturday, and after Ian's nap, we worked on putting up the tree. Ian had more fun playing with the ornaments on the floor, and he didn't want us to put them on the tree. He put one of them on there, but after that, didn't really want to touch the tree. Judging from his reaction, he doesn't like the feel of it. Our lights are on a remote because the plug is hard to get to, and Ian was a bit scared when we would say, "Lights on!" and the tree would turn on, and then we said, "Lights off" the tree turned off. We finally had to show him the remote and let him play with it to figure out what we were doing. Now whenever he sees the tree off, he wants it turned on. 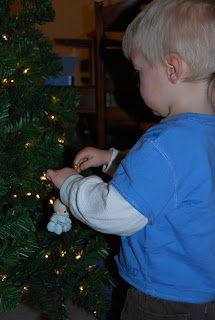 We spent Sunday shopping for a few Christmas presents (a new vacuum and some Wii games for Darrin and me) and watched the Packers lose yet another game. We had our last Thanksgiving meal for the year on Sunday night for supper. Marlena and Noah had dinner at their house with Marlena's mom and grandma. Even though we'd had so much turkey already, we were up for eating more, and it was so yummy.

This weekend was great, and I can't wait for Christmas break to spend more time with our families.
Posted by Colleen at 9:27 PM