This Saturday was quilting Saturday with the girls, and it was one of the most productive Saturdays we've had in awhile. Quite often we're so exhausted by the time Saturday rolls around we barely get started before lunch and we leave before dinner. Not this Saturday, though. I was quilting by 8:30 am, though I didn't make it to Sara's until 10:30. I was busy sandwiching my Dick and Jane quilt before I left. I had to sandwich the morning of because the night before I was finishing my Christmas ornaments. We exchanged ornaments this year and I paper-pieced a present ornament from a pattern Carol Doak offered her yahoo group. I also gave them each a spool of Aurifil thread, in the hopes of converting them. 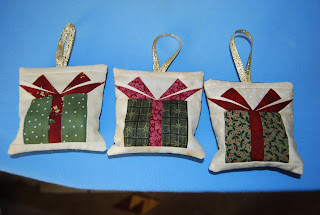 I didn't take a picture of the others, but Sara hand-stitched mittens out of felt/wool, Virginia made Santa Clauses out of fabric, and Marlena painted a clear glass ornament with stained-glass paint. They're all beautiful and as unique as their creators.

I worked on quilting Dick and Jane the whole time, stitching in the ditch around the small pinwheels. I got about half of the pinwheels done. It took a little while to figure out how to hook the walking foot up to the Janome, but with Marlena's assistance, we got it working. It was nice being able to quilt on my own machine, as in the past I always had to borrow Marlena's or Virginia's. The Janome worked beautifully and I'm so glad I made the switch. 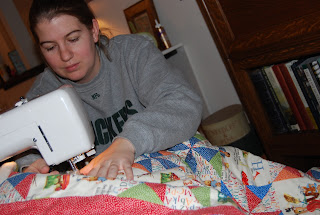 While I was busy working on that, Sara was hand-appliqueing a quilt with an interesting story. The quilt was worked on by her grandmother and her aunt, but after her grandmother died, it was packed away for about 10 years. It was recently pulled out and Sara's aunt asked her to finish it, making it a 3-generation quilt. 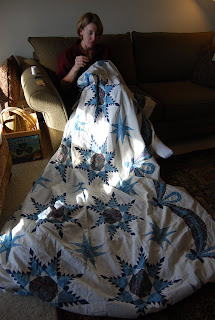 Marlena began the day working on fabric books to give as Christmas presents. Ian is getting a Rudolph book to add to his expanding collection of cloth books. When she finished up those, she moved on to a wall-hanging she picked up on our Iowa shop hop. It's a Schnibbles pattern called Nash. 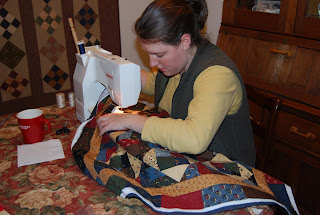 Virgina had an equally productive day, piecing together a tree skirt and a Christmas wallhanging. 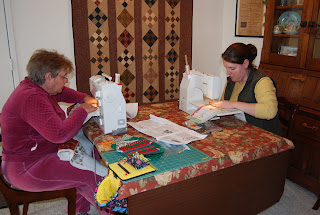 I only wish I was caught up with school work and Christmas shopping so I could continue the productivity of that day here at home.

And just because he's the cutest kid in the world (in my humble opinion), here's picture Darrin snapped of Ian today before we headed to church. I broke down on Friday and bought some clippers. After dinner, I gave Ian a haircut, and he screamed the whole time. It didn't turn out too bad, though I've got to figure out something to do about trimming around his ears. At least it has 18 days to grow in before Christmas... 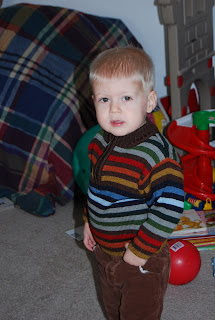 What a wonderfully productive day. i loved all the pictures of the quilts.
What a great picture of Ian. he looks so handsome