Saturday was quilt day at my house. Sara and Marlena came over and we quilted away the day. I got my block done for the guild block of the month. The colors are really off in the picture; it doesn't show how rich the colors really are. 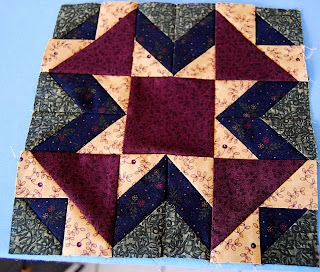 I got a start on my January wall hanging (yes, I realize January is practically over), and finished after they left. But I hate it, so it's being redone (probably next January...).


Sara left the first two books from the Twilight saga with me. So, after they left, I started reading and I haven't stopped. I am ADDICTED! I have to admit I was slightly hesitant in reading it due to the vampire aspect, but Sara said at its core it's a love story- and I'm a sucker for a good love story. She was right, and I am hooked. I started Twilight after Ian went to bed Saturday night, and finished it on Sunday. As soon as it was done, picked up #2 (New Moon) and had it done by Monday. My co-worker had #3 (Eclipse) waiting in my classroom for me on Tuesday, and I've finished it today. I can't wait to get my hands on #4- but what will I do when it's done... I haven't touched fabric since I started reading, so perhaps I should get back to quilting when I'm done- there's an idea :)


And, because no post for me is complete without some piece of Ian, here's a recent picture of him. He's sitting in the drawer that holds his cars when he picks up his toys at the end of the day. For some reason he likes to sit in it and run his cars on the couch. He's just so darn entertaining. We love watching and listening for what he'll do next. 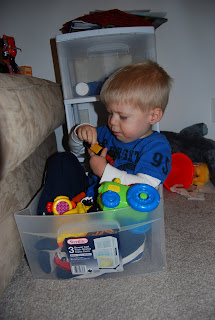 Gemma was addicted to the Twighlight serires aswell. She didn't move for three days over the Christmas hols and read all FOUR books.

love the photo of Ian