Ian had an interesting day today. It began like this: 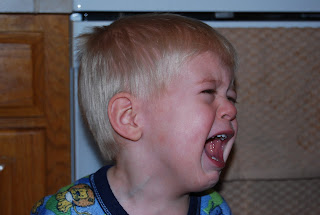 He wasn't too happy about not getting his way. We saw that face a lot this morning. During one such occasion, when we were getting him from his room, he learned how to turn his light on and off. This is a big feat in our house, because so often he wants a book from his room, but it's dark so we get it for him. Now he'll be able to turn his light on/off and get his own book. Ahhh, independence.

Tonight while I was cooking supper, he came up from the basement to check on the progress. After he saw what I was up to, he went to the top of the basement stairs to call Darrin. But, instead of saying "Daddy" he was shouting, "Darrin!" He shouted it about eight times before we figured out exactly what he was saying. I have no idea where he learned to yell for Darrin from.

He ended the day in a much better mood. He helped me make some pumpkin-chocolate chip muffins for breakfast in the morning, and got to reap the reward for his help. 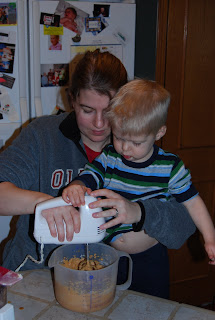