Well, the Dick and Jane quilt is tagged, washed, and ready for delivery. I finally finished it. To quilt it, I just stiched-in-the-ditch around the inner pinwheels and then between each of the rows/columns. I think it turned out great. I don't know why it took forever to get done. I didn't really run into many complications along the way. I just put it to the side once the top was done. My goal for the next quilt- sandwich and quilt as soon as the top is pieced. Otherwise, who knows how long that one will sit there. 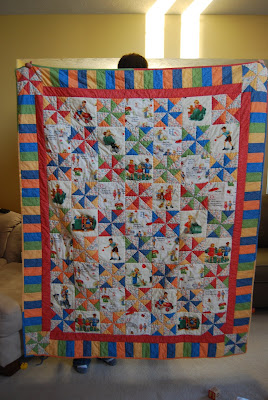 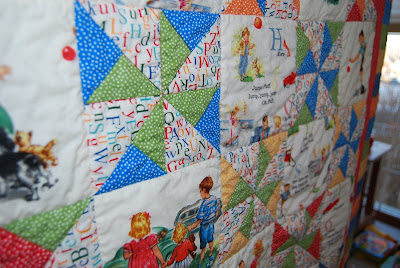 I went to the Brad Paisley concert last night with Sara, and it was a blast. We had FANTASTIC seats- 16 rows up and even with the stage front. His opening act was Darrius Rucker. I loved his voice as the front-man for Hootie and the Blowfish, and he sounded just as great singing country songs, and his country songs were GOOD, unlike some other genre artists who have tried to make the switch. After him was Dierks Bentley, who was hilarious. At one point, his next song opened with scenes from his music video for the song, and he sat down on the stage with a bucket of popcorn and some beer. He tried to shush the crowd and act like he was watching, but we were all laughing so hard. Finally Brad came on and played for 90 minutes. He is such a talented guitar player and was really fun to watch. I really enjoyed his show, though not as much as Keith Urban's.
Posted by Colleen at 7:49 PM

Email ThisBlogThis!Share to TwitterShare to FacebookShare to Pinterest
Labels: quilting

Love the quilt. I've had some Dick & Jane fabric around for years but hadn't found just the "right" project for it.... and glad to hear Darius is doing well. I've always loved his voice.

The quilt looks great - congrats on the finish!