If you look at my to-do list, it looks like I've been completely lazy this month, which is only partially true (I have become addicted to Mafia Wars on Facebook- which is the primary cause of laziness). Some of the things listed I put on my list to force me to do (which obviously hasn't worked), and the others I really want to finish but things always seem to come up. Here's a picture of the ONE thing I've crossed off this month- Sara's birthday present. It's a small wall hanging/table topper that measures 16x20. I gave it to her Monday at guild, which was only three weeks after her birthday (not too bad for me). 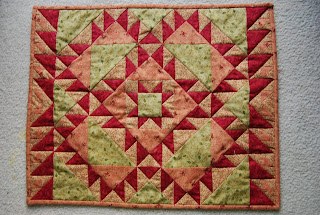 During spring break, Ian went fabric shopping with me. As we wandered around the store, we made it to the kid fabric. He found fabric with tractors on it and went crazy. He was such a good kiddo there that I bought a fat quarter of the tractor fabric and another of farm animals and sewed them together into a blanket for his stuffed animals. It's currently covering up an animal in his bed, so I don't have a picture of it. I did free motion quilt on it for the first time. I definitely ended better than I started, but I still wouldn't enter anything I FMQ into a quilt show...

Tonight I finished up four red/white/blue blocks. They're being mailed tomorrow to Jen in Wisconsin. She's going to assemble them, along with other blocks from the Prolific Online Quilters, into comfort quilts. A member of our group had a son who died in Afghanistan. 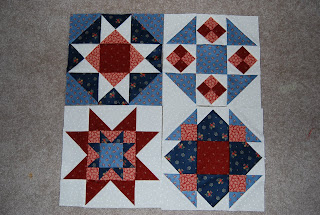 I made the EASIEST thing for dinner tonight, using my favorite cooking technique- the crockpot. I got the recipe from allrecipes. You simply dump some dry onion soup on the bottom of the crock, put the roast (recipe calls for beef, I did pork) on that, and top with a can of cranberry sauce. It looks really dry to begin with, but it makes a delicious gravy. I threw in some sweet potatoes. MMMMMM

Ian had another first tonight- He said, "I love you" to Darrin and I without us saying it first. He also helped us solve a mystery. The other morning Darrin's alarm clock went off, which never happens because I get up first, so he doesn't set his. Today while we were in our room, Ian played with our clocks, and turned Darrin's alarm on. Mystery solved.

Darrin and I had another date night Friday night. Angie was unable to watch Ian on Friday, so Marlena and Noah babysat him, and just kept him until Saturday morning. We went to PF Changs (yum) and then saw the movie State of Play. It was a good flick. What was even better, though, was sleeping in on Saturday.
Posted by Colleen at 8:23 PM