It was a long day at our house today, and the day isn't over yet (thought I'm definitely taking it easy the rest of the night). After some family snuggle time in bed, we made the first of three trips to Menards. We'd been talking of replacing one side of our fence, and today was the day we stopped talking and actually started. We headed to Menards together to pick out what we wanted. Luckily we took two vehicles to Menards, so that while Darrin was waiting for the wood to be loaded, Ian and I came home and started the demo process. 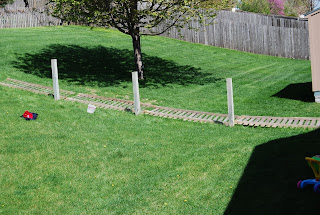 Darrin got back from Menards, and after we unloaded, we ate lunch out on the deck. Ian loved sitting at his table from Grandpa and Grandma. It worked perfectly out there for us to eat on. 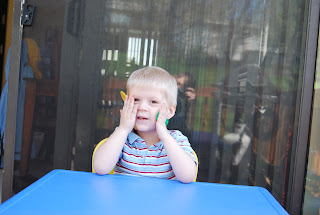 After lunch, Darrin made another run to Menards for the rest of the boards, and I attempted to put Ian down for a nap and kill all the yellow flowers growing in our yard. I got the flowers sprayed, but Ian never slept. When I came in, he was still up talking in his bed. After an hour, I figured might as well get him out; it was a beautiful day outside. When I walked in, he had dumped all his stuffed animals onto the floor and was walking from one end of his crib to the other clapping his hands. This isn't the first time lately he hasn't taken his nap. I hope he's not getting to the point where he doesn't need a nap every day. Summer vacation is coming up, and I look forward to the time he sleeps so that I can get some of my things done that I need to.

Darrin got back and we started putting up the boards. Ian decided he needed to get his tools out and help, too. He was so cute, walking around hammering things that were just fine, and over the nails Darrin had just hammered. He helped us drill the pickets in as well. Such a good helper (with a too small shirt). 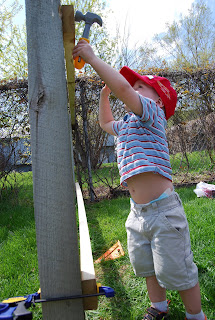 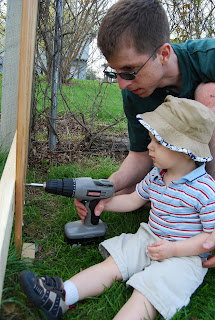 We got about a third of the way done today. We should hopefully be able to get the rest finished tomorrow. It doesn't look perfect, but it looks better than what we had. Many of the previous boards were falling off, and some of the 2x4s were so rotten that they were no longer straight.
Posted by Colleen at 7:24 PM