The Weekend... so far

Friday was an interesting day for Ian and me. We ran a bunch of errands in the morning (all those that I couldn't do on Thursday because of his temp). One of our stops was to Hy-Vee, where Ian decided he, and only he, could push the cart. So, I would tell him stop and go, and he'd push it down the aisle. He was doing a good job until we got to the frozen food aisle. He decided to stop at one time when I didn't say it- he noticed Dora Popsicles in the freezer. They were on sale, so they went in the cart. After his THREE HOUR nap (he was sick the day before...) we headed outside to eat one. He got it up to his mouth and the minute it touched his mouth, he realized how cold it was and he didn't want anything to do with it. I offered it again (the scrapbooker in me wanted the hot summer day Popsicle face picture), but he did his best to squirm in his chair and avoid it. 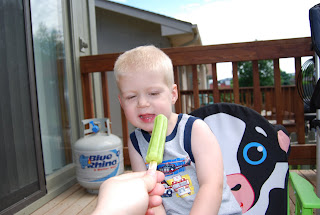 Ian had been complaining of an "owie" on his foot for most of our errands. I finally wasn't driving while he was complaining and was able to take a look. His new shoes had rubbed a blister, which had then popped, right on the edge of his arch. Now, you would think these tears were because of this blister getting grime in it: 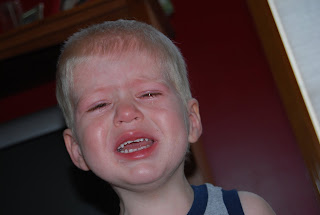 Nope. It was because I had put a band-aid over it. He kicked, he screamed, he wanted absolutely nothing to do with this thing called a band-aid. I can't decide if his aversion to it was becuase the only time he's had a band-aid on him is for his shots, or if it's because he doesn't remember ever having one and has no idea what a band-aid is, so it scares him.

We finished up Friday night going with a bubble party on the deck. He got so coated in bubbles that it gave a different definition of bubble bath. 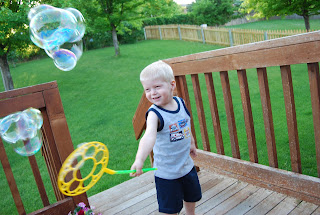 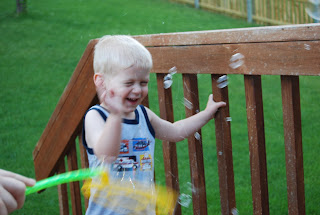 Today we dove deeper into potty training Ian. My goal is to have him trained by the end of the summer... we shall see. Ian's had a seat that goes on top of our toilet for awhile now, and he's gone on it once, though he sits on it at least once a day. Lately, he's been asking to sit on it more, but nothing happens. Today I stopped by Target and got him his own potty and some Cars undies. 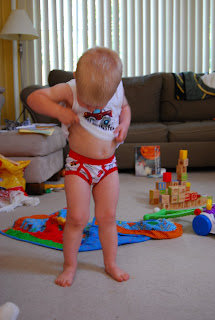 According to what the pediatrician said, if we're home, we should let him run around naked, and keep the potty close at hand. We put his new undies on and told him he couldn't get McQueen wet, so to tell us when he had to pee. Didn't work. So then we did the letting him run naked route- outside because we were grilling dinner. He wasn't outside more than 3 minutes before he peed on his sandbox. I guess like everything learned, it will take a bit for him to catch on to things. I'm wishing he was born potty trained...

While he's been taking long naps, I haven't gotten anything on my to-do list done (I should actually change the one on my page). I have gotten the first two rows of my Shadow Play sewed together, and gotten some serious Wii playing time.
Posted by Colleen at 9:12 PM

Good luck with the potty training - my son is just a little younger than Ian, but I am not even near ready to tackle it yet! Please post when you have success.