This week is Railroad Days in Omaha/Council Bluffs. For a total of $10 for all three of us, we could visit the Botanical Gardens, Durham Museum, Union Pacific Museum, Rails West Museum, and General Dodge house. We only made it to two of them. We probably could have seen more had we started earlier, but Darrin and I slept in. Ian spent the night with Marlena and Noah so that Darrin and I could go celebrate our 5-year anniversary (nothing too exciting, just dinner and Star Trek).

We began our day at the Botanical Gardens, where my friend Sara works. She had the fun job of directing traffic all day out in the sun. The part of the garden we spent the most time in was the model train section. They have recreated many of the "famous" buildings of Omaha and the world out of all natural materials. Those buildings are very lacquered to make them waterproof. 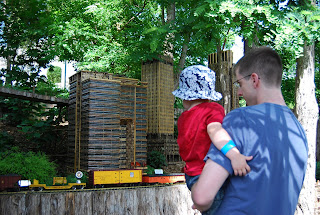 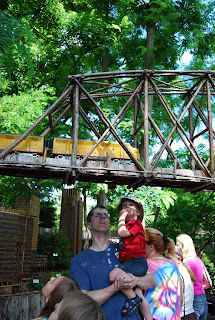 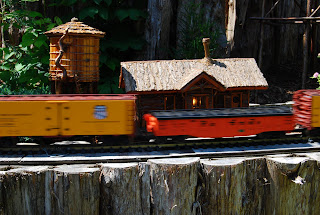 After watching those Ian and Darrin took a trip around the park in a miniature U.P. train. It was probably the highlight of Ian's day. 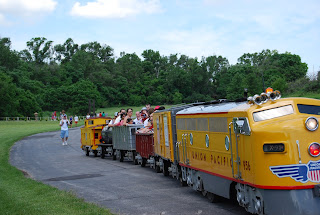 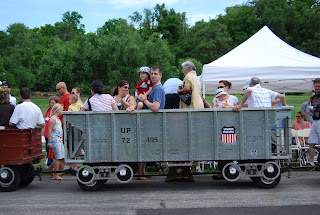 After that, we headed towards the school buses. I wish I had a video camera along to capture Ian's expression when we told him he got to ride a school bus. He inhaled deeply and took off at a dead sprint down the path.

We took the bus to the Rails West Museum, where they had old train cars you could walk through. Ian and Darrin are on the top-right of the engine, and he's waving in the window of the caboose. 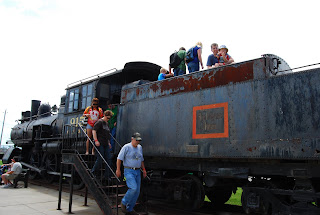 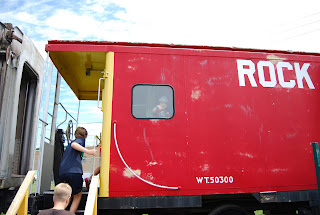 It made for a long day for Ian, and he was getting very cranky, so we headed home. Karma made a good pillow for him. 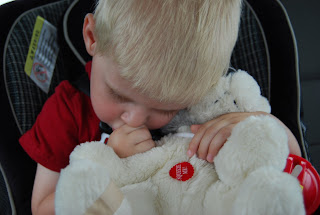