The Rest of the Weekend

Sunday was another fun-filled day for us. We went to Alexa's first birthday party, and spent the rest of the evening playing outside. Ian tried out his Cars kite. He needed more of a sustainable wind to keep it in the air, but it was fun for the brief seconds it was up. 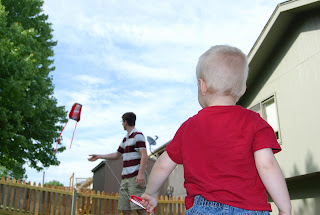 Then Darrin and Ian began chasing each other around the yard, and for whatever reason, Darrin climbed up into the tree. Well, monkey see, monkey do, and Ian had to climb into the tree, too. It's a good thing Darrin's tall and could just set him up there and be within arm's reach if needed. I'm surprised how well Ian did. He didn't want to get down he was enjoying himself up there. 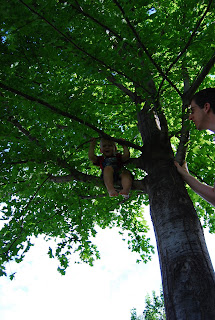 He made sure to wander over to the puppies and say "Hi" too. 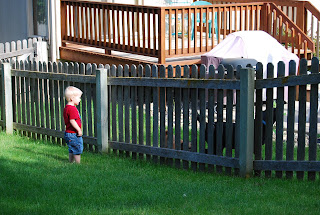 Monday was a pretty uneventful day, but Ian did do something that made me chuckle and love having a 2-year-old. As we were picking up toys for nap time, he flipped his cars and trucks, which were all on their wheels in a straight line, over. He said, "Cars go night-night, too." He is just too darn cute! 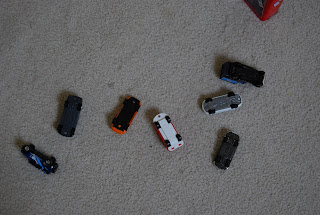 He is way too cute. Give him a big hug for me.