I got it done! 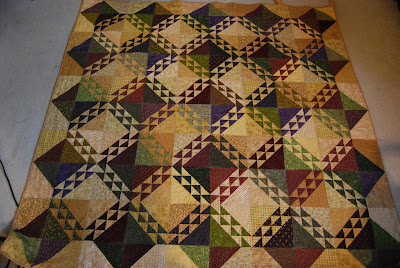 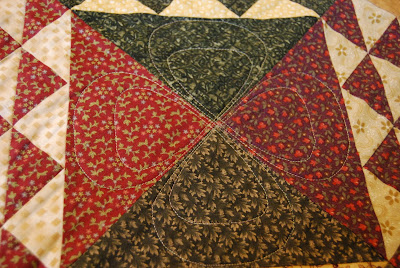 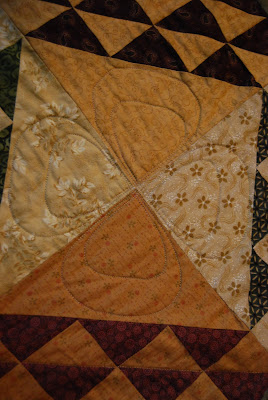 See that UFO list, over there on the right- I just crossed off Shadow Play. It is done in time for the quilt show this weekend. I left for our quilt guild meeting at 6:20 last night, after eating a quick supper with my boys. At 5:55 I was tucking the last ends of threads between the layers of my Shadow Play quilt. I've been working feverishly on it the last two weeks to get it done. In less than 30 days it went from a pieced top to a quilt, which is crazy for me. Ian got very used to hearing, "Mommy's busy quilting, ask Daddy," and Daddy never seemed to mind. He played the part of both of us these last few weeks, and I'm so thankful for him. One night while I was working on it, I joked with him that he can't wait for me to get done so he doesn't have to do everything around the house. His response was that he can't wait for me to get it done so that he wouldn't be out 5 dollars. Marlena, Sara, and I have started a bet with each other. We pick a date and one of our unfinished projects (or more than one) to have completed by that date. If we don't get it done, we throw $5 into a pot. At the end of the school year, the person who completed the most of their projects wins the pot.

So that comment of Darrin's motivated me, along with his other comment that the center motifs look really cool (he usually never comments on the quilt unless I solicit an opinion). Thank God he said that comment about the motifs, or I would have given up. There were 41 of them and they started off taking about an hour each to sew, which is probably of combination of being the first ones and having lots of fabric to shove between the needle and my machine. I never wished for a long-arm machine more than I did sewing those center blocks. I tried sewing it with afree-motion foot, but there was too much fabric for me to shove to have my stitches look even halfway decent, so I had to switch to my walking foot and sew, pivot, sew, pivot, over and over. When I made it to the blocks closer to the edge, it wasn't too bad. By then it only took 25 minutes to sew the motif (as I write that, it still seems really slow when I look at the size of the motif). But I LOVE how they look. I also stitched up the long, diagonal between the tiny triangles and around the perimeter of the motif blocks to try and tack down some of those spots where there were lots of seams.

So that quilt, along with my Dick and Jane quilt, will be showing in the Cottonwood Quilt Show this weekend- the FIRST quilt show I've ever been in. Next UFO goal: Moneik's prize.
Posted by Colleen at 7:55 PM

Email ThisBlogThis!Share to TwitterShare to FacebookShare to Pinterest
Labels: quilting

Congrats on getting it finished! What a huge accomplishment. I'm sure it will be fun to see both quilts hanging in the show.

Wow -- it looks fantastic! And I love the motif in the centers of the blocks. Congrats on the finish and take pictures of it hanging at the show!

I love the colors! Good luck to you at the show!