So much has happened since Friday- it's hard to believe it was just a few days ago. Friday at school we had our Halloween celebrations. The staff chose to dress as Disney characters. I went as a chef from Ratatouille, as did another teacher. My line was the I was a baker of buns. 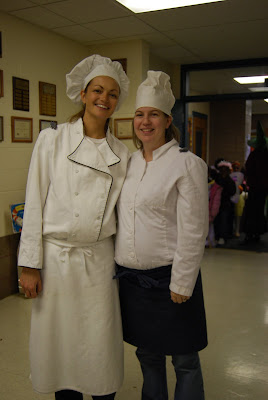 Others on staff dressed up as Snow White and the Seven Dwarfs, the cast of Peter Pan, 101 Dalmations, and Winnie the Pooh. It was quite fun to see what everyone came up with.

Halloween day was a jam-packed day back home in Iowa. Ian got to experience real-life farming in the morning, and then go trick-or-treating as a farmer that night. He spent part of Saturday morning with my parents' best friends riding in a combine. He loves to tell how the arm would come out and fill up the wagon with corn. He rode along in the tractor to the grain bins as well. I didn't ride along, but Darrin did. He said he was speechless the whole time- which is something Ian isn't very often. 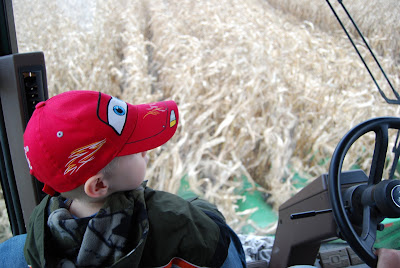 That night Ian got to do more farming in his Halloween costume. He started off the night on his tractor, but he can't quite reach the pedals yet, so we only made it around the block before we dropped it off at Grandma and Grandpa's and continued off on foot. He knew he was supposed to say Trick-or-Treat, but he didn't until Aunt Cara's house- our 2nd to last stop of the night. At many of the first houses, he thought he was there to visit and would walk right in, not saying anything to the people in the door. 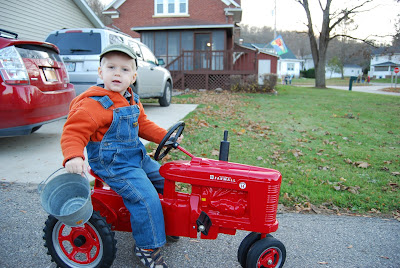 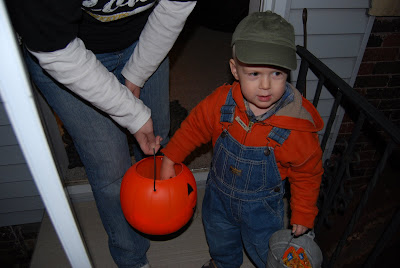 On Saturday, I co-hosted a baby shower for my sister-in-law Stephanie. She's due at the end of December- 10 weeks before me. Since it was Halloween, it was a costume party. Stephanie was the pregnant nun. Her friend just to her left went as a deviled-egg, which I thought was the cutest costume ever. Darrin's grandma dressed up as an "old grandma." It was her first time ever dressing up for Halloween. I had a lot of fun hosting, and I think everyone had lots of fun playing games and enjoying the food. 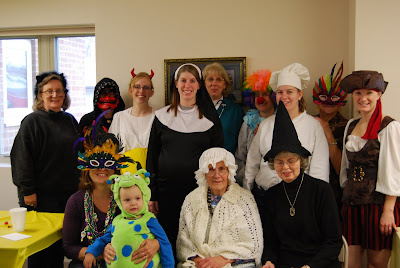 Before we headed back to Omaha on Sunday, we went to tag Mom and Dad's Christmas tree. Picking out the Christmas tree is one of my favorite memories from childhood, and I wanted to share that experience with Ian (we use an artificial tree here at home). To get to the tree farm, we just have to walk through my parents' back yard to their neighbor's. Every year growing up, Cara and I would compete to see who could find the best tree for the year. We'd tag it with our names, then go back after Thanksgiving to cut it down. Ian didn't get quite as exuberant as Cara and I did. He didn't really care about the perfect tree. Instead, he had fun pretending that the trees were his house or his garage. He'd hide in them, sit under them, or play hide-and-seek with us. 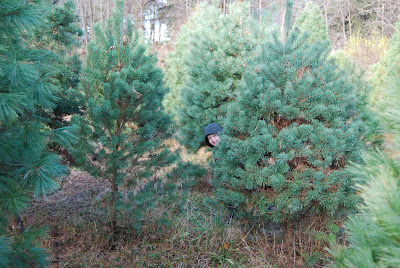 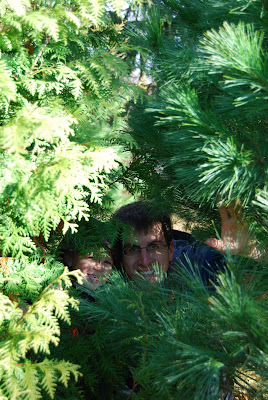 Sounds like a fun Halloween weekend was had by all. What a creative baby shower theme!