I don't know what to say, other than we put up our tree tonight and Ian was a hoot. It started with the tree box. It evolved from being a horse, to a motorcycle, and a boat. He "rode" it all over the living room, thanks to help from Daddy. 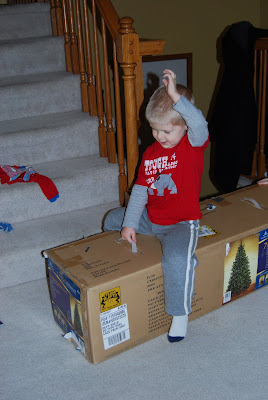 As we were putting ornaments on the tree, he claimed some for himself and refused to let them be placed on the tree. The bear and penguin were in the "snow" on the carpet, and the ice cream truck delivered ice cream to Mommy and Daddy. 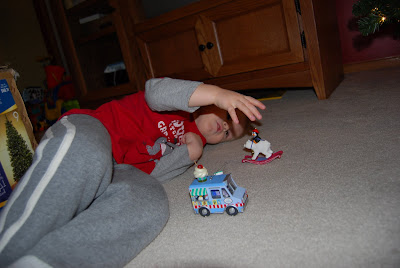 As we pulled out the stockings, he said, "It's Santa's boots!" and then tried to put them on. He tried to do it standing, but eventually figured out sitting worked better. After he got them on, he put our angel tree topper on his hand to use as a puppet. I tried to get him to wear the tree skirt as a cape, but he didn't go for that. 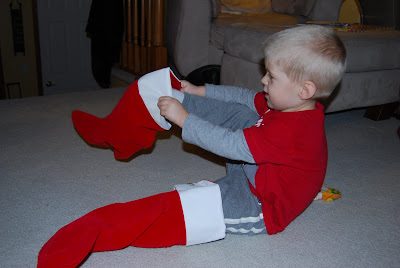 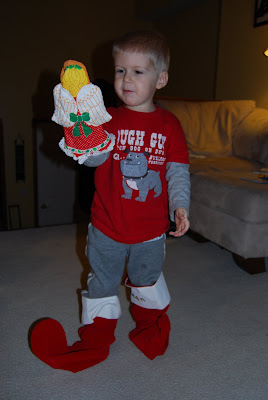 But the best part was Ian telling the tree lights to be on/off. We have the lights hooked up to a remote so that we don't have to climb behind the tree to plug it in. Ian would go up and say, "On. Off." and we would make the tree 'listen'. His reactions were hilarious. Unfortunately I was laughing so loudly while I was attempting to tape it that you can't hear him, so we had to edit the tape a bit, and missed some of his hilarious reactions. Check it out here:

We also got a video of him singing his version of his favorite song, "On Top of Spaghetti." I'm actually surprised he got as many words as he did, seeing as how he was distracted by his ornament toys.


Tonight definitely put me in the holiday spirit.
Posted by Colleen at 8:49 PM

Thanks for sharing such cute new videos. It has spread the holiday spirit to us as well. We hope you guys have a great Thanksgiving! From W3 :)

Oh, that is so funny! Thanks for sharing!