It's the first snow day of the season, and Ian has been talking of sledding since yesterday morning. We got a bit of snow Sunday night, but not enough to cancel school yesterday. For a kid who's only gone sledding once before in his whole life (before he was even 1), he wouldn't stop talking about going sledding. So after work, Darrin and Ian headed outside. Turns out he's too big for the sled he had, so we headed to Target to buy a new one for the impending snow.

Which brings us to today. It started snowing off and on around 10 last night, and has been snowing steadily since 8 this morning. After a quick trip to the doctor's office for a baby check-up, we bundled up into our snow gear to try out the new sled (which Ian picked because it's red like Elmo). It works wonderfully and Ian was so proud he could go sledding by himself and loved being out in the snow. I'm surprised he didn't fall off the sled more, because it doesn't have sides, and he would let go of the handle. I was just waiting for him to tumble, but he never did. 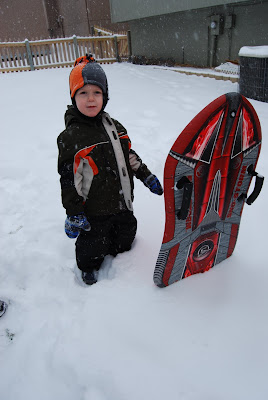 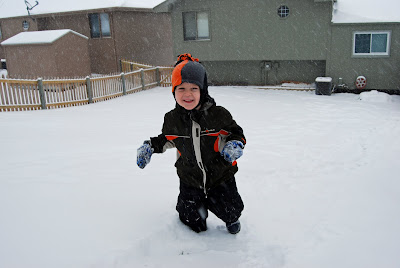 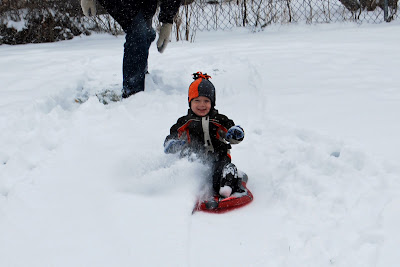 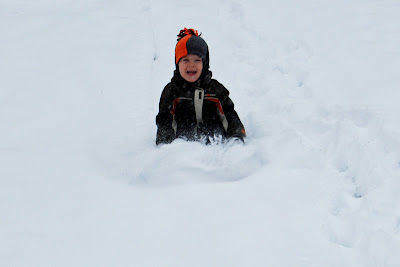 Now he's getting his first cup of hot cocoa. I'm so glad Darrin's working from home today and we can have a family snow day. And hopefully I can spend the afternoon sewing and getting some Christmas presents finished. 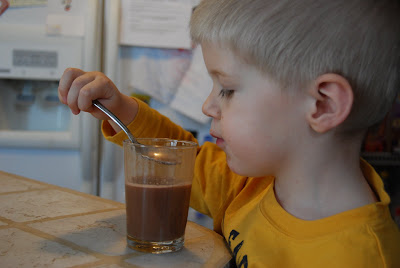 Email ThisBlogThis!Share to TwitterShare to FacebookShare to Pinterest
Labels: winter

Sounds like a fun snow day! We got snow but only a couple inches, so not enough to cancel things. The pictures of Ian sledding are so cute. I received your gift last night. It's so awesome! I'll have to take a picture and blog about it, but just wanted to say Thanks! It's absolutely beautiful and so different from anything I make. I love it!

Oh, what fun! I especially love his rationale for the slide he chose! We only got an inch here, but had a chance to throw some snowballs. I am really looking forward to a day like you had!