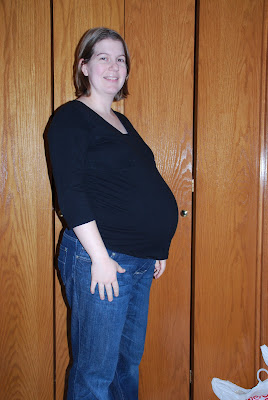 My due date is exactly one month from today and I can't believe it. Things are so different this time around. Every waking moment when we were pregnant with Ian was preparing for him. Now, every waking minute is spent with him, and preparation has to happen after he goes to bed, or between the fits he throws because Mommy's too busy to play with him.

Other different things: This picture is the first one we've taken of my pregnant self. With Ian, we took one about every week. We didn't think Ian could get here fast enough. By this point, we were prepared for him to come at any time. Not this time around. The bag isn't packed, and the quilt, which for Ian was done at least a month before he was born, is sandwiched. It's not getting touched, though, until I have my plans done for school. And we've made enough progress in the last week that we're ready on the home front, but I've got a birthday party to hold before another birth happens.

There are little things that are different between this baby and Ian. I'm a lot more comfortable this time around and nimble. Could be because I'm busy playing with a toddler on the floor, but who knows. I'm not as swollen and I don't have as much heartburn. These things I know because I kept a journal with Ian. If we have a third, though, what I recall from this pregnancy will simply be from memory as I didn't keep one this time around. We are having to recall how much Ian moved. This one moves so much we think it's impossible for Ian to have moved more.

I've had three co-workers give birth in the last 3 weeks, all having 6-pound babies, and two of which went early (which has put the idea of going early more in the forefront of my mind, and I DO NOT want to go early!). I told my midwife this yesterday and she said she's pretty sure mine's already 6-pounds, and I'm pretty sure she's right about that. Ian was over 8, and my guess is this one will be too, especially because there are four more weeks to go!

Just thought I'd write a quick post to show no baby yet- Now, off to write some plans so I can get to that quilt before the baby arrives!
Posted by Colleen at 7:44 PM