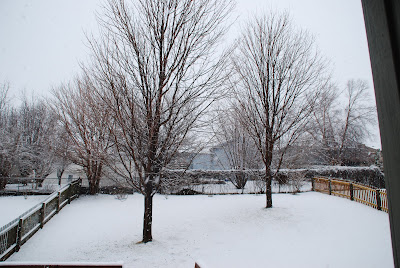 See all that white stuff in the picture. That was not there 5 hours ago. Five hours ago, at 4:something in the morning, when I was awake feeding Annaliese, there wasn't a speck of white stuff on our ground. The past week has been warm, with a bit of rain, and it took care of all the snow we'd had on the ground since the first week of December. But it's back. At least it's a March snow and won't stick around for three months!

While eating breakfast this morning, Darrin and Ian were discussing the snow. The conversation went something like this:

Darrin: So, Ian, are you going to help me shovel the snow?
Ian: No, it's too cold.
Darrin: That's not a problem. We'll just put hats, gloves, and your coat on.Ian: No, that's okay. It's cold out there. It's warm in here- so I just watch you from the window.
My excuse of being pregnant to get me out of shoveling isn't valid any more. Do you think I could borrow Ian's reasoning and just watch from the window, too?

How quickly they catch on! I'd sure rather stay inside today too.

It just shows how smart he is.