This weekend actually started last Wednesday. Darrin took off that day, along with the rest of the week off, and we headed to the zoo. The first stop was the jungle, where the monkeys were extremely vocal that morning and Ian enjoyed the "roots" of a tree. 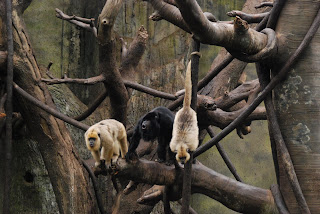 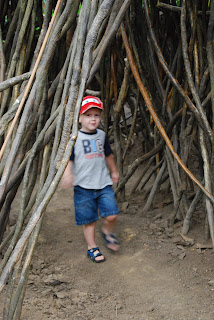 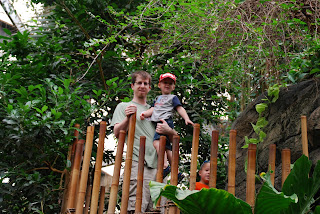 After walking through the aquarium, cat house, and gorillas, we stopped by Madagascar, where the kids were able to get up close to the lemurs. 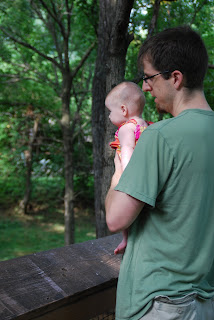 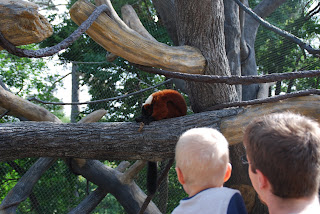 The Garden of the Sense was the last stop before the train. As always, Ian had to climb up on the elephant and get his picture taken (exploring the sense of touch), while Annaliese went for the taste sense: 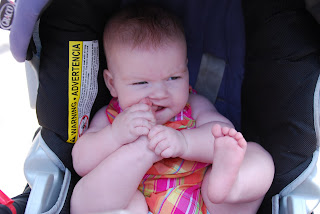 We had to wait a bit for the train, but it made Ian's day, so it was worth it. Thursday brought the oh-so-familiar drive across Iowa. We took my dad out for his birthday dinner to Gunder (the only restaurant I miss back here in Omaha), and put the kids to bed early to prepare for the busy days ahead.

We spent Friday chilling in St. Olaf until supper time, when we headed for a fish fry at the acre. No one can fry fish and potatoes like my father-in-law and Mike. We have been spoiled and made it home for two fish fries this summer. My dad came out to eat with us (mom was working) and take Annaliese home early for bed. In the meantime, she chilled with Owen and Ian had fun playing baseball. He also talked Grandpa Dan into a tractor ride, and Owen got to go on his first ride as well. My sister's baby shower was Saturday around noon, and thankfully Makenna was able to come and entertain Annaliese for me. And when Ian showed up in the end, he had to get a picture with his "girlfriend". That night we spent out at Kam Ham Park enjoy time with friends I hadn't seen in years. After a scrumptious supper of pulled pork and fresh sweet corn, we headed down to the fire pit. My dad had tried to talk Ian into getting his feet wet in the stream but he refused. Little did we know that a few minutes later he'd be soaked from head to toe. Some of the other kids there were crossing the stream on an old railroad tie, and Ian wanted to play, so he crossed, too. He did it successfully several times before slipping and falling into the water below. No screaming or crying followed (amazing if you know Ian), and he proceeded to play in the water for at least a half hour afterwords. I don't know which he enjoyed more, playing in the water, or the three rides he took on the Kubota through the woods. 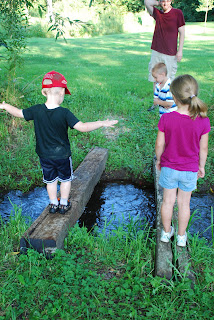 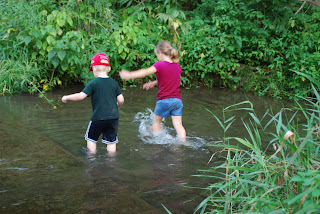 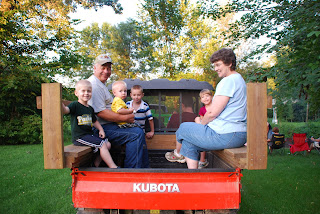 The fun for the weekend didn't stop there. Lunch on Sunday brought a picnic with some of Darrin's extended family we don't usually see. All three kids (and Jinx) took a dip in the pool at one point, though Ian spent the most time there. After all the excitement from the days before, we really enjoyed the night just chilling around the house. 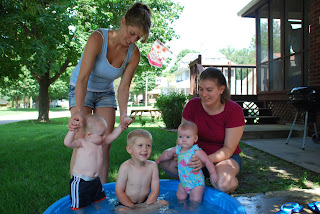 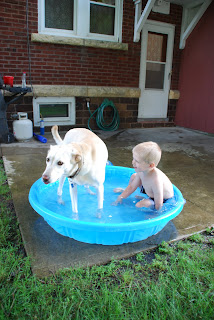 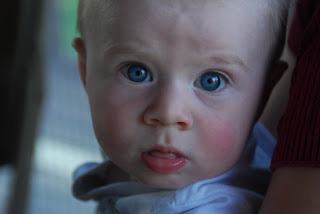 This long weekend was the kind I've wanted to have back home for quite awhile now. There were no big events (weddings, birthdays, holidays, etc) that we were back for. Instead, we were able to relax, play, and spend time with family and friends
Posted by Colleen at 8:45 PM

Looks like you had a fantastic weekend! I love spending time with family and relaxing.

Very cute pictures of the kids. I stole the pic of me for my blog - so thanks.