Dec. 13- "Make your own wrapping paper" day.  I had to go to a Deacon's meeting at church, so I was there long enough to see them start, but not the final product.  Annaliese was all about the mess of painting, and it's her work that covers most of the page.  Ian was very focused, using small strokes with a paintbrush or drawing people with a marker. Little did I know he also drew on my wrapping paper for the birthday present I opened a day early, writing To: Mom From: Ian, Annaliese, Dad all by himself (with Darrin only have to spell out a few of the words).  So proud of him! 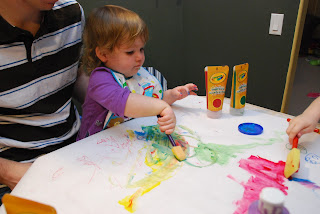 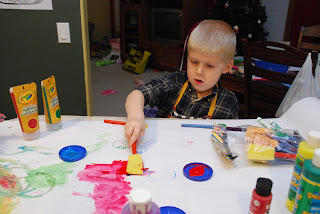 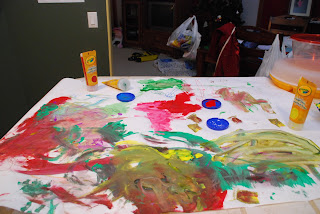 Dec. 14- "Visit the Reindeer" day.  When Ian read that this morning, he said, "But that's too far!"  In reality it's practically around the corner at the greenhouse/nursery we live near.  We intended to go just to see the reindeer, but ended up having so much more fun. They had different cutouts you could pose in, bowling, bean bag toss, ring toss, coloring, and Ian's favorite (Annaliese's least favorite) a ball pit. Ian even snapped a picture of Darrin and me.  Ian asked as we were leaving if we could go back tomorrow.   That was after he asked if he could stay there forever and we told him no.  It turned out to be a way more fun night than I had thought it was going to be.