Self-reflecting, I think I did a terrible job of accomplishing  my goals.  I started off the month on a mission and accomplished much of this the first weekend, but then work took over, I got exhausted, and preferred to be lazy on the internet instead of make progress on my goals.  New goal for February- have less goals and achieve them, most likely by spending less time on the internet!

Here's some of what I actually did accomplish:

- Finish December and January month banners.  I did get both done, but only snapped a picture of the January one. 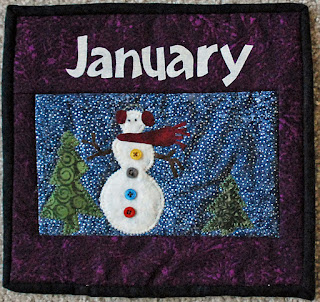 - Make birthday party invites.  I took the lazy way out and only made a few for people who don't have access to the internet.  Otherwise emails or facebook invites were given...

- Finish half the remaining layouts for Ian's baby book.  I didn't get half done, but I did get a few.  Some just needed to be reinforced/repaired, so I don't have pictures of those.  Here are a few I did finish:

- Keep up-to-date in project life.  I have done this, and have actually had the previous week done by Tuesday of the following week, I've just been really lax at getting them posted.  When the sun comes out, I'll get a picture of last weeks layout and post them.  You can see the pages here.


Things I didn't accomplish but had intended to when January started was to scan 100 pictures for mom and dad's album and sew Ian's pirate hat.  Maybe they'll happen in February...

Here are some additional things I did get done:
I also found a way to patch Ian's jeans (he has holes in 9/10 pairs, not to mention some khakis and cords). I patched one pair, but on the to-do list for this weekend is to patch the rest.

February will prove to be a busy month, so not sure how much crafting will get done- I have a joint birthday party to throw for my two kiddos. Can't believe they're both going to be a year older!
Posted by Colleen at 10:01 PM