Summer Camp is over at Club CK.  This year I did four out of the five badges, for which I created some of my favorite layouts to date.

The first badge I earned was for the "Markers and Pens" badge.  CK gave you a coloring sheet to print out. I chose to print it on a transparency, but when the ink smeared, I threw some clear embossing powder on it and used my heat gun to emboss it and make it dry.  I don't have any alcohol-based markers to color with, so I colored with Crayola markers and repeated the embossing on it.  The final product ended up looking like glass in a stained glass window. The banner and journal tag were made in this method.  For the bottom transparency strip, I used blue stickles (liquid glitter).  The pictures are of the first time Ian jumped off a board at swimming lessons. He wasn't scared to get up there the first time, but was terrified for the first jumps that followed. The layout was inspired by a layout on page 35 of the May/June 2012 issue of Creating Keepsakes. 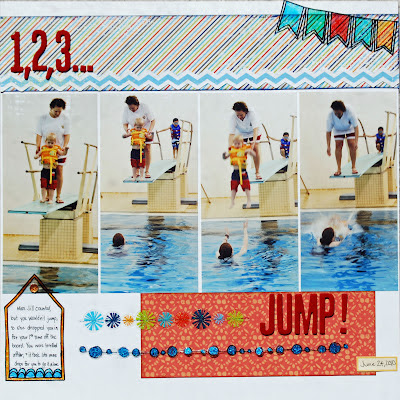 The next layout I did was my favorite for the week. Ever since I did the splattering layout for T*T*D, my mind now includes paint when I think "now what can I do to this page?!" Which is usually what I ask myself on every page after the paper and pictures are down.  This layout was for the "Found Objects" badge, for which you were to include a found object (Chobani wrapper) and paint.  In looking through the photos I had printed, I knew instantly when I saw these that I would use them and finger paint white paint to look like the yogurt Annaliese had everywhere. Darrin even commented when he got home about the paint looking like the yogurt, so I guess I succeeded.  The journaling is about the first time we gave her a spoon to eat with. 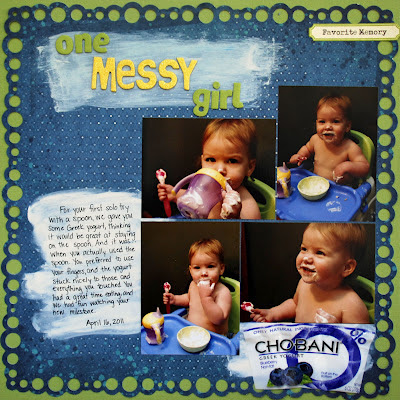 A third challenge involved something I have a lot of- fabric.  For the "Fabric" badge, you had to incorporate fabric into your layout. I chose to sew it onto the paper in strips, much like I would put patterned paper back there in strips. And look, paint made an appearance again (this time I was going for water droplets).   I sewed some random rings to go with the theme of "Ring Around the Rosie" which Ian had a great time doing in the pool with Grandma and Grandpa.  It was inspired by this layout. 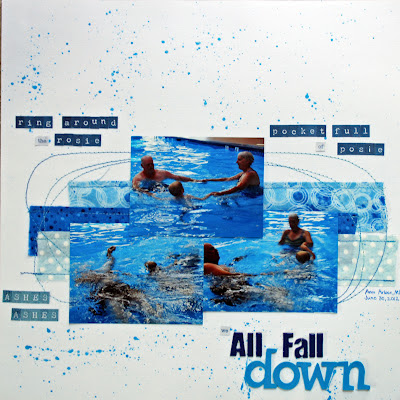 And finally, the last badge I earned was the "Sticker" badge.  You had to alter stickers in some way.  The "happy" sticker I coated with some glossy accents, the heart next to fearless has some stickles (liquid glitter) on it, and the alphabet letters in the title I inked and put stickles on.  After the fun I had coloring, painting, and sewing on the first three, this one was just ho-hum, and it was the end  of the week...  Still, I can't believe I got as many layouts done this week as I usually get done in an entire month.   Good thing summer camp happens while I'm on summer vacation; I know I couldn't get this many done if I had to work as well. 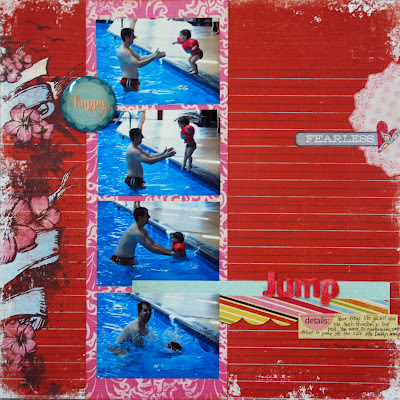