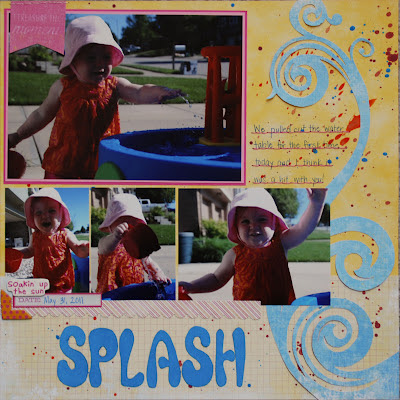 I was a bit intimidated by the thought today at T*T*D, if its possible to be intimated by a thought. I've never used paint on a layout before; don't really like to use it in real life. I put off the layout for as long as I could, and then got down to business.  One of the first decision I made was what pictures to use. I knew I wanted pictures that would be fun, so the pictures of Annaliese splashing in the water table won out over those of her baptism or getting tubes (the other sets of pictures I had ready to go).  I found the water swirl and knew I'd fussy cut it, and place it on the right, which helped me figure out where I wanted my splatters. I couldn't figure out if I wanted to splatter before or after I added the patterned paper, so I did some searching on the web. The ones I liked had it on the patterned paper, so that's what I did.

The actual splattering was really fun. I did a few test runs to figure out which of my brushes I wanted to use and which technique I wanted. I opted for a brush with stiffer bristles.   To make the splatters on the bottom, I tapped the top of the paintbrush. To do the splattering in the top, right corner, I flicked the side of the brush (like you'd flick someone's ear) to create a bit of movement.  I remember conscientiously shrugging my shoulders when I got too much orange and telling myself to roll with it.

Assembly was easy. The pink banner in the top, left, I had to stamp about 20 times to get the words, and it still isn't perfect. It was something new, though, and so I wanted to use it. I used clear embossing powder on both it and the title so that they shine a bit and appear wet, to go with the theme.  I love how this layout came together. Stay tuned, because when summer camp is over at Club CK, I'll be posting another layout I painted on, this time without hesitation!
Posted by Colleen at 7:00 AM

Super job with the splattering! Love the colors and the sweet photos!