How can it be that Ian started Kindergarten today?  Seems like just yesterday he was my itty bitty boy (all 8 lbs. 4 oz.) and we were bringing him home from the hospital. Now he's a very big boy (did I mention we had to buy size THIRTEEN shoes for back-to-school) and he was so excited for his first day.

Before we left home, we had to take the obligatory first-day-of-school picture. I based this off of something I saw on Pinterest. In that one, the kid is holding the sign, but figured by doing it this way, we can use the easel every year and gauge how much he grows. So the easel Noah made us is going to be sticking around for a long time. 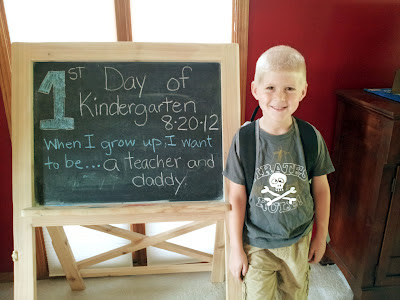 We had to run to church before school to grab his jacket we left there the day before. The whole time after grabbing it and heading to school, Ian kept saying, "I can't wait to get to Kindergarten! I'm so excited!"

At school he put his bag, jacket, and sleeping bag in his locker, after a refresher course in how to open it, and headed to his classroom to get started on the task on hand- playing with play-doh at his table (I learned the hard way, don't call it a desk). 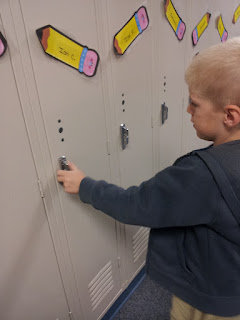 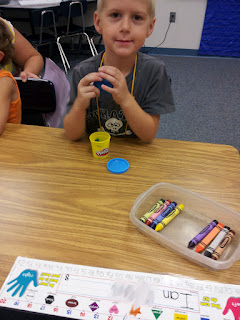 I asked him how his day was, and he was able to be pretty descriptive, which was amazing given the explanations I got every day after preschool. When I first picked him up at school, he told me, "Kindergarten is the best!"  In art class they got to draw whatever they wanted; Ian chose to draw a flower, butterfly, and sun.  For lunch, he chose to have the yogurt and cheese stick option instead of the main hot dog entree, which I wasn't totally surprised by.  Recess was his favorite time of day, though he said he hasn't made any new friends yet. Rest time was very short; you didn't have to sleep, only rest your body. She read three stories today, "Kindergarten Rocks!", "Chicka Chicka Boom Boom", and "The Kissing Hand."  For snack they had fruit snacks that juiced when you bit into them. His only disappointment seemed to be that he had to go to the center where you strung shape beads onto a string, when he really wanted to go to the Lego or kitchen center.

We asked him if he wanted to go back tomorrow, and he was all for it. Hopefully that will continue as the days and years of school pass.
Posted by Colleen at 8:30 PM

I'm so glad he had a great first day! I also think it's so awesome that he wants to be a teacher and a daddy. How cute!

They aren't the same shirt, but he does have a pirate shirt.