My garden is at our church.  There, I have three of the sixty-four plots available.  And I've planted tomatoes. I don't like to eat them raw, but I love them in sauce.  Last year I had a few tomatoes, but hated the recipes I found (not that I remember which ones they are). So this year I vowed to find a recipe I liked, and actually remember which one I used for next year.  I picked up some more Roma tomatoes at our church garden mart on Sunday to go with the ones I had picked from our garden.  The first recipe I tried was from Deb at Smitten Kitchen- Fresh Tomato Sauce.

Deb's first step was to remove the skin from the tomatoes. So here they are all sliced with x's on the bottom (I just thought of something I want in my kitchen- a wall mounted wireless tablet, so I can look up my favorite recipes, but not take up valuable counter space.) 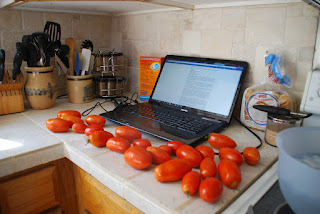 Then you had to drop them in boiling water for a couple seconds, then transfer them to ice water.  Here's where I learned my first lesson of the day- make sure the water is actually boiling. I dropped them in when the water was hot, but not boiling.  I ended up having to throw them back it.  This method works pretty slick if the water is actually hot... 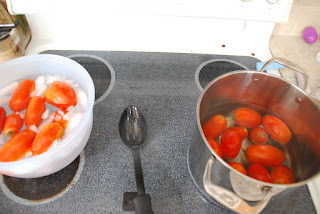 After the tomatoes were all ready, you were to add minced garlic, onion, carrots, and celery to some olive oil and let is simmer for ten minutes. Mincing isn't something I'm good at, so I used minced garlic from the store, then just shredded the onion and carrot.  We didn't have celery in the house, and as it was nap time, I couldn't run out to get some. 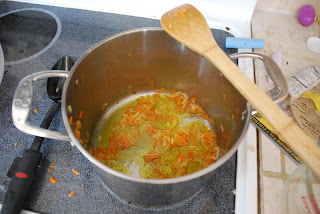 Here they are all peeled. Next step was to slice them vertically, squeeze them to get the juice and seeds out, then chop them and dump them in the pot.  I sliced them, but squeezing didn't work, so I just used my thumbs to push it out, then squished the remaining flesh through my fingers and it plopped into the pot. It was at this point that I remember canning all the stewed tomatoes and tomato juice with my parents in the summer. When we did it then, it was always the hottest day of the summer (it was near 100 when I did this), and they didn't, and still don't, have central air.  I was very grateful I was doing this in my cool kitchen.  I also remember why my mom always wore an apron.  Another lesson I learned, don't wear a light shirt or glasses when doing this- they'll definitely get splattered. 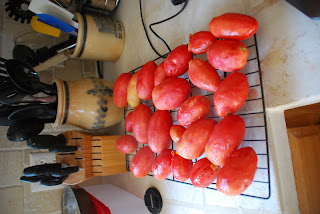 As you were squeezing the juice and seeds out, you were to reserve the juice in case it needed to be added to the simmering sauce.  This is all the juice I got from the tomatoes above.  After canning with big boys or early girls last year and the excess amount of juice they had, it was nice to work with the Roma. 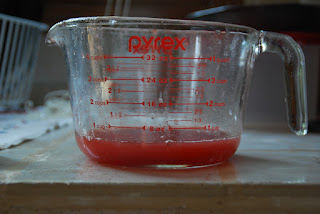 Finally all simmering on the stove. As I tasted it, I added some pizza sauce seasoning and a bit of sugar.  Used my potato masher a bit to break up the big chunks, but it didn't get as smooth as store bought.  Deb suggests using an immersion blender. I don't have one of those, and I was fine with the consistency. 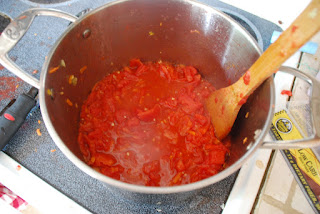 It was a bit chunky, and I kept thinking it looked a little rustic. It tasted pretty good. Better than the ones I tried last year, though it still felt like something was missing, so the quest will continue (that's the plan for today's nap time).  We really couldn't taste the sauce on the finished pizza. Don't know if that's good or not. I thought it was fine, as I'm not a big fan of lots of sauce or sauce flavor on my pizza. 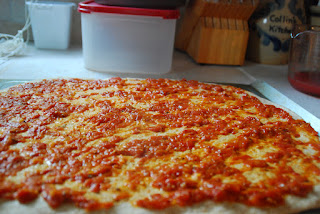 I wish I had a faster method of removing skins, seeds, and juice. That's the most time-consuming part...
Posted by Colleen at 8:30 AM

We always used a colonder I think it's called. It's a bit tipi shaped metal strainer with a wood masher and you move it around and around the colonder to remove the juice from the tomatos. I haven't canned in years, but we loved that thing.