Three weeks in and I can attest to the fact it's so much easier this year than last year. Last year I was trying to make everything cute and was using supplies from a bunch of different places. Sticking to one design (Seafoam) and just focusing on pictures + stories has made this so much easier. Here's the spread for Jan. 14-20, 2013.

There's an insert this week- one side is a purple painting from Annaliese and one of her daily sheets talking about how much she loves painting (she did three purple paintings that day). It also talks about how she was able to participate in Happy Feet  that day and how much she enjoyed it.  On the back of the insert is Gertie the Goose, a bit folded, that Ian made in kindergarten this week when learning about the letter 'g'.

Other than that, everything was once again Seafoam except for the letter stickers on the "Row, row, row your boat" picture.

Here's a closer look at the pictures and the stories that go with them:

Posted by Colleen at 1:46 PM No comments:

Week two is in the books. So far the beginning-of-the year excitement about doing Project Life is sticking with me.  I've got this crazy idea that I'll post the previous week's spread on my blog on Saturday so that our loved ones know what's going on in our lives; and that the need to post will help keep me on schedule, too. So here's a look at week two, January 7-13.

Most of the stories this week come from Saturday and Sunday. Just the way it is some weeks.  Everything is from the Seafoam digital kit except for the Packers card. I used an image from the web and put it on the free grid card to print. It tells the story of the end of the season for the Packers and our long wait until August.  The music insert is a note Ian brought home from music class this week for being a Marvelous Musician (he followed directions and behaved during class).

Dance Party! Darrin spent his birthday money on a new blu-ray player. This one streams live, including Pandora. While one of our favorite songs was play, Some Nights by FUN., everyone hopped up and had a dance party.
While I was serving dinner at Rainbow House, Darrin parked in the driveway to let the kids ride their bikes in the garage. It was Annaliese's first venture on her new big girl bike, and she did really well! Check it out on video here.
I had to make bars for church on Sunday, but of course wanted to sample them, first. The outdoor temps make a great place for cooling down the bars quickly so we could eat them for dessert.
Caught the two of them watching TV like this, though I'm not sure what Annaliese was looking at when I snapped the picture.
After we read a story at bedtime, we always say our prayers. We start with The Lord's Prayer, and then roll into our specific prayer. I love watching Annaliese say her prayers; usually we lay in her bed facing each other with our hands pressed together praying. I wanted to get a video of it, but instead of being her sweet self, she got a little silly.
Just a merged picture of my two noise makers. A pretty common sight around our house, especially Ian making noise with his mouth while he plays.
Posted by Colleen at 3:47 PM No comments:

I'm planning on doing Project Life again this year, and I'm already off to a better start this year than I was last; I have my title page done this year.  I started off really well last year, and even posted a few of these.  I've got the best intentions of keeping up this year, so we shall see what happens. I bought the digital Seafoam kit, and for the most part, I'm printing the cards as they are and using them in my book. 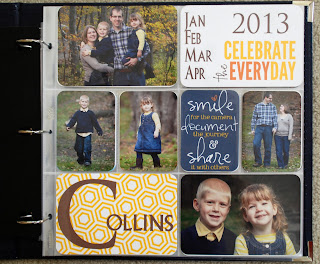 The title page features many of our family pictures we had taken in October.  The 4x6 inserts are from the Seafoam. I added the brown text to each of them before printing on cardstock.  The "smile" card is a freebie on Becky Higgins' site. I cropped it down and changed the colors on it.

I'm planing on adding a banner each week to the intro card (left page, top left). I'm rethinking the staple, though, so that it doesn't leave an impression on the picture behind it.  Everything is Seafoam but the tag on the picture of Darrin and I (Jillibean) and the before/after Thickers.  Pictures this week:

The pictures that aren't included are Darrin and I kissing in the new year and the counter full of groceries ready for my freezer meal frenzy cooking. Also my cutie, which I blogged about here.
Posted by Colleen at 8:17 PM No comments:

I was uploading and editing pictures from this week and just had to share how stinkin' adorable my daughter is.  She wanted to wear dresses to school most days this week, so I got her to pose for me. In the other, she had just finished feeding Baby Belle in the doll high chair and put her in the crib, and then Annaliese decided to get in the high chair. 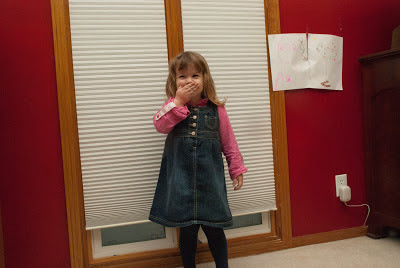 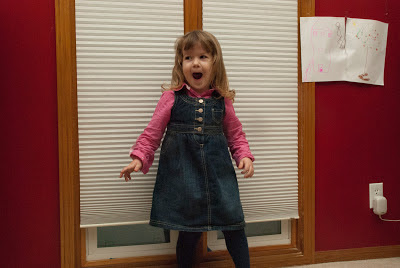 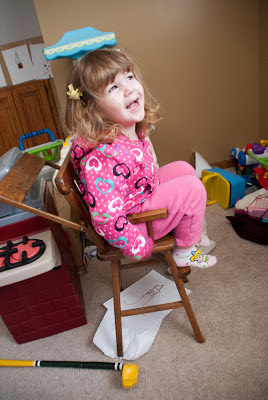 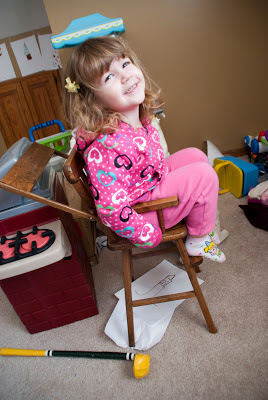 Email ThisBlogThis!Share to TwitterShare to FacebookShare to Pinterest
Labels: Annaliese

Sledding at Grandma and Grandpa's

Friday the 28th we spent at my parents' house. Growing up, I always had a great time sledding there, and I'm so glad my kids can experience sledding there, too (though Annaliese did NOT enjoy it!)  Behind their house is a large shed to hold a semi and trailer.  The road to get to it is long with a slight incline, and the fact the snow is scraped and then packed makes it go pretty fast.  By the end, though, the gravel was really showing, so Darrin and Ian switched to a complete opposite type of hill- short and steep.  Both of them were equally fun.  When we set out from the house, we had to go down the steep, short hill to get to the road.  Annaliese went down on her sled and when she reached the bottom, the first words out of her mouth were, "Go back to Gan-ma and Gan-pa's!"  She was adamant about it and really didn't like sledding. Darrin took her two more times after that, with her kicking and screaming. Then we just had her stand by whoever was snapping the pictures, though Darrin did get her to go down one more time at the end... by tricking her.