Week six covers Feb. 4-Feb 10, so I'm a few weeks behind. I should be caught up after this week, though!

Left page pretty much Seafoam cards or ones I created to add to the line. The insert is a painting Ian did in art class of a ship in the ocean. 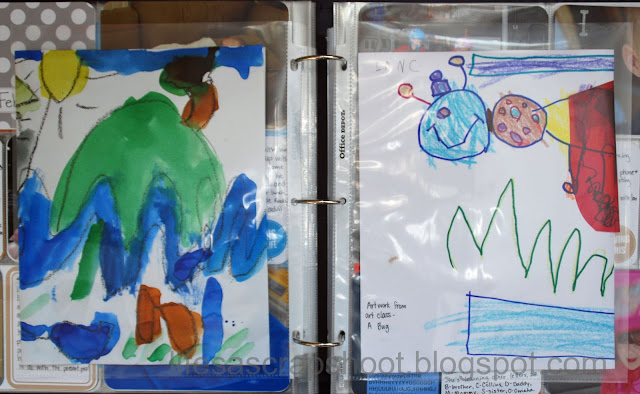 The back of the ocean insert showing the island. The other insert was another art class creation, a bug with transparency-like wings.

The right page this week shows the back of the bug and some more Seafoam.  The bottom left pocket I didn't have a picture for and I had no idea how to fill it (part of the reason this week took longer).  I scrolled through facebook but didn't have any posts.  Then I looked in my text messages. Annaliese is obsessed with the letter 'A' and pretty much other letters. When we practice sight words with Ian for school, she has a practice letters with her.  She texted Darrin her message, and I printed it out and wrote the story next to it.  I also, used some tiny letter stickers and added them to the two right cards so that is says, "She is loving this," and, "He is treasured." I took journaling a bit different on those cards, and instead of telling the story of the pictures, told about what the two kids are currently obsessed with.

And now, a closer look at the pictures for this week: