Credit for this year's idea actually goes to Darrin's sister, who pointed out back in the spring that they should be Batman and Robin for Halloween. Wouldn't you know it, over the summer, Batman was their favorite cartoon to watch. By the time Halloween rolled around, it wasn't very hard to convince them to be the dynamic duo... as long as I promised Robin would have a skirt.

I pulled together different ideas around the web, but most of the inspiration for Ian's costume came from here (though the mask was from here), and Annaliese's was mainly inspired by this one (tutorial for the tutu from here). I couldn't find the material they used for a shirt, but a tank top worked just as well.  She's actually wearing a pair of Ian's old pj's underneath. Those would be the same pants he wore under his Peter Pan costume two years ago. Glad I don't clean out drawers very often... Thanks to the tulle on her skirt, I think I'll be finding gold glitter around the house for the next year.

These were by far the easiest costumes for me to assemble over any previous year. It could have something to do with the fact there wasn't any satin involved. Knit is so much more forgiving.  Either way, they're both sleeping in them tonight because they're that comfortable (minus the cape, mask, and skirt).

A bit of fun in the backyard before trick-or-treating began. 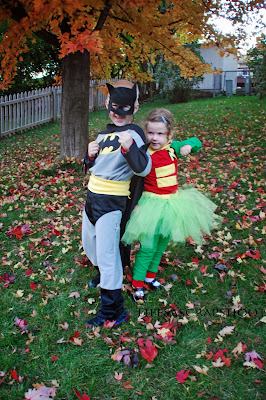 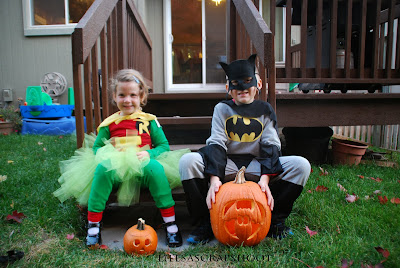 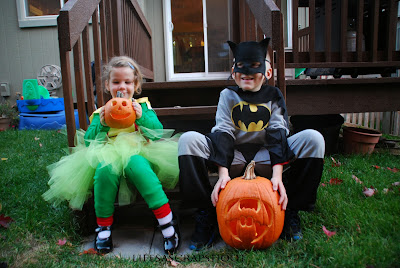 Practicing on each other in preparation for the bad guys. 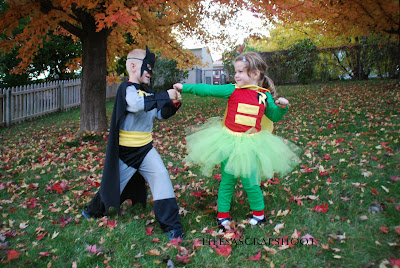 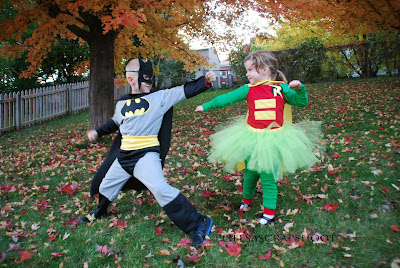 Our neighborhood goes all out for Halloween. Several houses are all decked out. These were just two I could get decent pictures of.  The first house they've been calling it the "Haunted House" every time we've driven past this week.  The second one had mannequins all over the yard, and the kids were apprehensive to go to the door. They weren't sure if they would move and be a real person or not (they had real people hiding amongst the them last year). 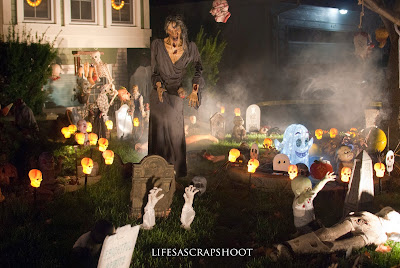 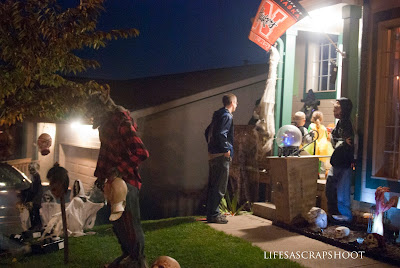 Annaliese would call before they'd get to the house, "I want to press the ding dong!"  Eventually we had to take turns with every house, but I loved that she called the doorbell a ding dong. 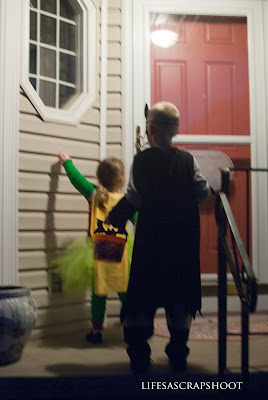 Ian really enunciated his "Trick or Treat" phrase, putting a crisp /k/ sound at the end of trick and then pausing for a second before saying or. It actually sounded like three words instead of one- trickrtreat. 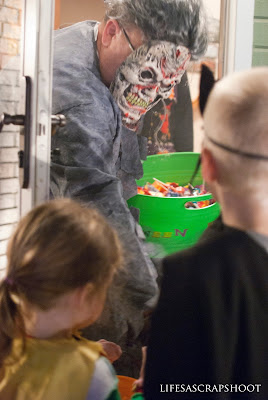 We left our bowl of candy sitting on our front steps, and all 100 pieces were gone in the hour we were out.  I'll have to buy more for next year.  I doubt kids took too much. There were lots of houses with bowls set out, and there were just lots and lots of kids out.  Our kids didn't do too bad. 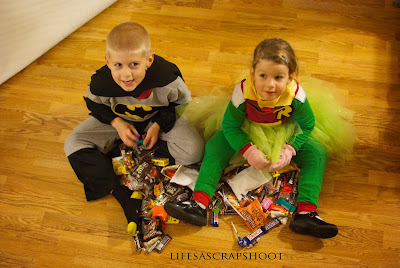 Great pictures, I have copied them off for Grandpa and Grandma. Thank you.

I love their costumes, great job. Looks like they had fun