December Daily is an idea Ali Edwards began oh so many years ago. Essentially each day is documented in some way leading up to Christmas (and this year, I may go past it... we'll see how full the album gets). Last year, we did an activity each day in conjunction with our advent calendar, and I used my December Daily album to document what each activity was.  This year, we're doing the same thing, and many of the activities will be the same.  In order to have a  bit of a different feel to the album, though, I'm going to try and focus on a story surrounding the event- focusing on something small and telling its story, instead of the basic, "Here's what we did to celebrate advent today."

Normally by Dec. 1st,  I'd like to have all my foundation pages in the album, so as I print pictures, I can easily scrap them. But the month of November got away from me, and I'm just now finishing my cover. When planning my cover, I basically have one requirement- it can't be too dimensional. I don't want the cover so bulky that the items on it could get caught on something and ripped off, so I kept that in mind while brainstorming ideas.

Confession time: This cover went a completely different direction than I originally thought. I was going to use my new silhouette (early birthday present!) to create a mask and do a very word-centered title.  Once I got the snowflakes down, though, and showed Darrin what I was thinking for the next step, he said, "But you'll cover up a lot of the snowflakes.  So, on to Plan B... which I love :) 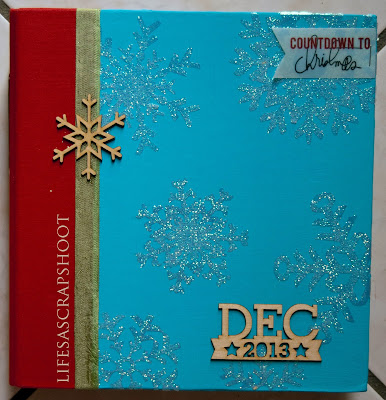 I'm again using the Simple Stories Sn@p binder (6x8).  I taped off the red part and painted with some lovely blue acrylic paint. While it was drying, I cut out the snowflakes on my silhouette cameo (the inaugural cuts on my machine) using the double-sided adhesive.Once dry, I put the snowflakes down, tore off the top layer, and added the glitter. For the finishing touches, I added a ribbon from my stash, wood veneer from Elle's Studio, and a banner from Heidi Swapp.
Posted by Colleen at 7:40 PM

Gorgeous! I love the snowflakes--ingenious!