Welcome to the "My Favorite Thing" blog hop at Child's Play Challenges.  You should have arrived here from Jane's blog.  If this is your first stop, you might want to hop on over to Child's Play to start from the beginning.

It's the time of year when kids will be opening presents that might just become their new favorite toy.  When my son was 2, he's favorite toy was a puppy his aunt and uncle had gotten while working at the vet clinic.  He was promptly named Karma after their dog she resembles... sort of.

Karma went everywhere with him and did everything with him.  Now, four years later, she looks drastically different; you can tell she's been loved.  Along the lines of differences, I scrapped most of this layout at least three years ago.  I did it at a crop and put it in an album to bring home, where it stayed until a few weeks ago when I pulled it out to finally put a title on it.  I added a few more embellishments, too. If I would have scrapped the whole thing recently, though, I'm not sure the clear stickers below and above the grid would have made it on the layout. 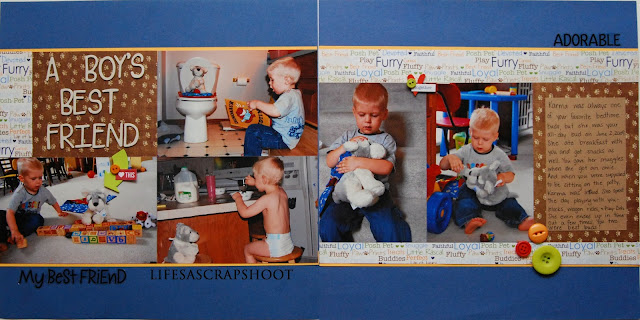 As a thanks for stopping by my blog today, I've got a few of my favorite scrappy things put together as a prize. To be eligible, leave a comment below about a favorite stuffed animal/baby doll of your own.  Mine would have been a toss-up between my two Cabbage Patch dolls, Cora and Megan, or my Care Bear Cousin Bright Heart Raccoon (which, funny enough, my son now sleeps with every night- yes, the exact same one). 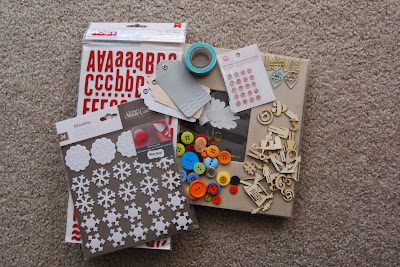 And now, on to Stephanie's blog to continue the hop.
Posted by Colleen at 2:00 AM

Your LO is definitely a good one since it doesn't look dated even though it's been in production for awhile! lol The clear stickers are a cute touch and I like the bright buttons and the arrow. Great boy's theme LO.
My fav doll was a rubbery doll I received for my first Christmas. I still have her so she is waaaay over half a century old since I am just a little bit older! lol

Such adorable photos! Love the one of him reading to her whilst she sits on the potty.

I had a dog named Henry.

Great photos. Isn't fun to see how your scrappy tastes have changed? I almost did my favorite stuffed toy which was a white cat my Grandma gave me that was make from real rabbit fur.

Sweet layout of Karma.I still have my teddy bear and I'm almost 60.

Cute layout! My youngest has a favorite teddy bear that he still is very close to (and he's now 10!). It was once white...now a shade of grayish-white is the best we can get! I can't remember a favorite for me. I do remember having Raggedy Ann though!

Love that name; Karma! Very cute and original!
My favorite stuffed animal was my Pink Panther. I couldn't sleep w/out him. Poor baby was so worn out from my love, having had to have many "surgeries" to fix the parts of him that were falling apart. I'm happy to say I still have him!

Hey there girl! First time reading your blog! I LOVE IT! I am going to continue reading now! K chism

Adorable photos of your son Karma - he really is very cute. I had a collection of stuffed animals as a child - my favourite from my toddler days was also a dog - he was called Ruff.

Awe! Isn't he cute! Loving hte buttons. And, the puppy is just adorable.

That is too cute, a boy and his stuffed animal. I remember my brother had a knitted Kermit the frog, it had long arms and legs and he had to bring it everywhere! Brings back good memories. I also had a handmade stuffed bear with the plastic googly eyes. One of them hung on by a thread in the end but I still loved that bear.

Oh that is just too cute - I love that you featured so many different moments/times in the layout; it really demonstrates just how inseperable they are! (I was a Tender Heart Care Bear girl, and used to sit with him every Saturday morning watching his friends on TV, the Care Bears, eating cinnamon toast haha)

Awww! Adorable! You know that I am a big fan of your multiple photos layout, beautiful as always! Neat and clean!