This was a FUN week of break.

On Wednesday, the weather was gorgeous, so we headed to a park to play.  There was a little 3-year-old boy there, and Ian included him just like another little sibling, while Annaliese basically did her own thing. They both had lots of fun.
After the park, we were surprised to pull into our driveway and be greeted by this wonderful sign!
And then on Friday, on our way to visiting our parents, we swung by our future house, and it had a very similar sign in front of it!
Between those days, we attended a library story time at Scheel's, and were rewarded with a free ride on the Ferris Wheel. It was the first time Annaliese and I had been on one.  I'm terrified of heights, but stuck it out for their sake.  Ian was tall enough to go on his own, but I told him us newbies needed an experienced rider to go with us.
There have also been MANY nights like this, when after we leave his room for the night, he turns his lamp on and reads, sometimes for at least an hour. It always makes me smile, because I did the same thing when I was little.
And if you look at the pictures of Annaliese,she's got butterfly wings on in all of them. That wasn't a fluke, that cape was on every day of the week, all day long, no matter where we went.  The park, Scheel's, or in the picture below, Target and home. Love her spunk (and the fact the cape was mine when I was little. Thanks Mom and Dad for keeping stuff like that!) 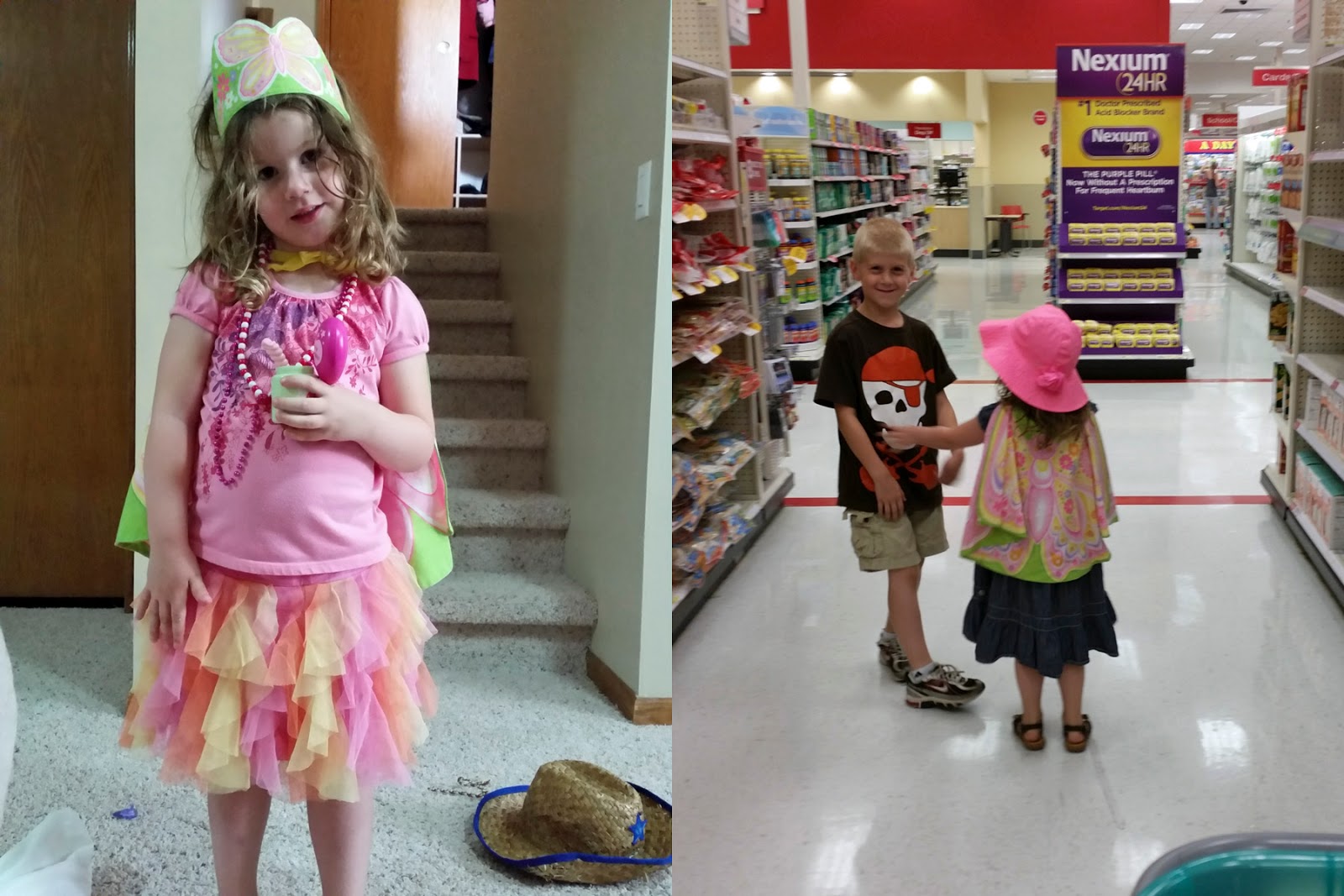 And then Friday we drove home to see our parents and the kids met their new cousin Emery for the first time. 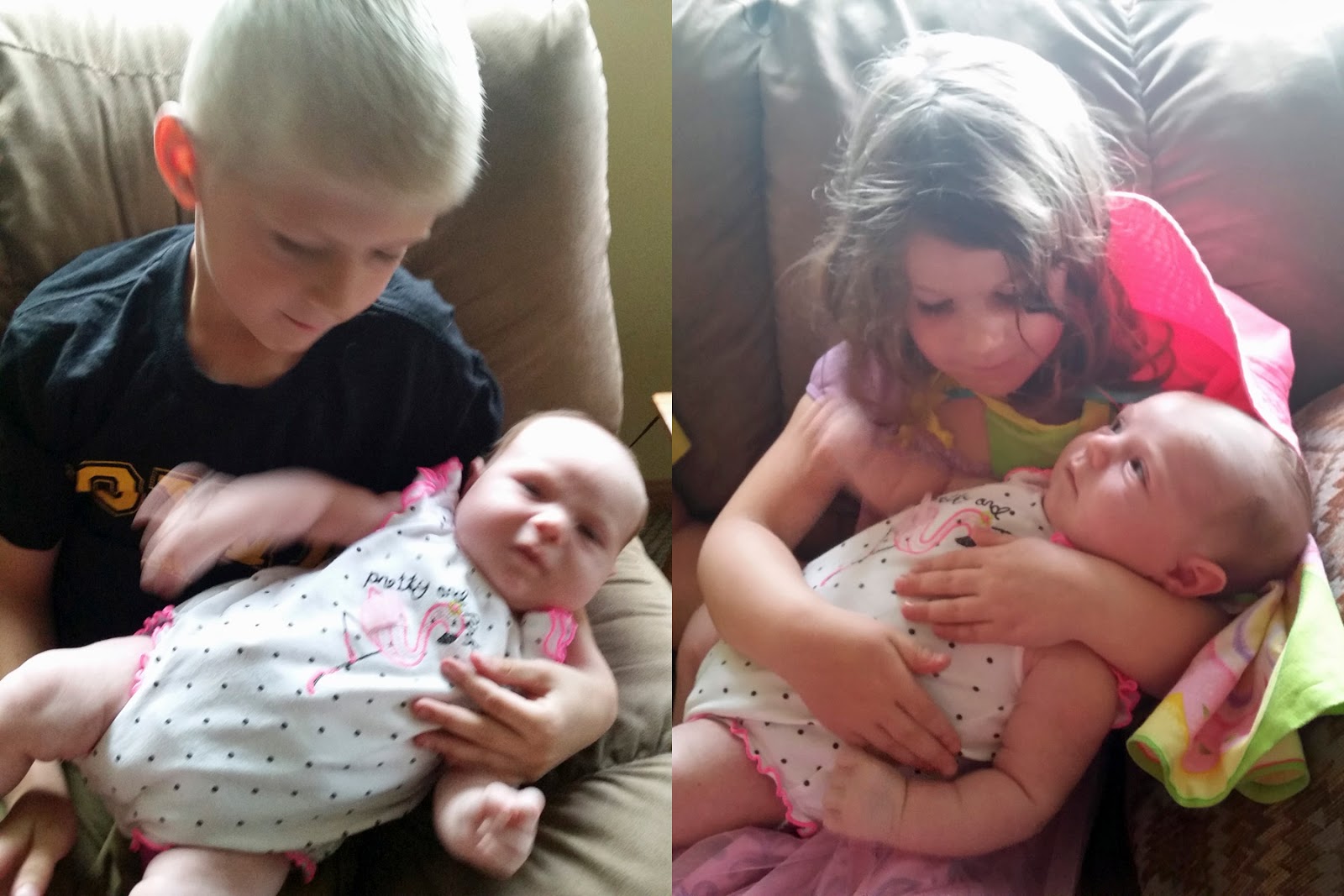 And it's not a trip back to Grandma and Grandpa's without a bit of lawn mower driving. We kept teasing Ian he needed to practice because it will be his job to mow the lawn at the new house. This time Grandpa hooked the wagon up in back so Annaliese and Lacey could ride along.  If only the mower was the same color as the wagon... 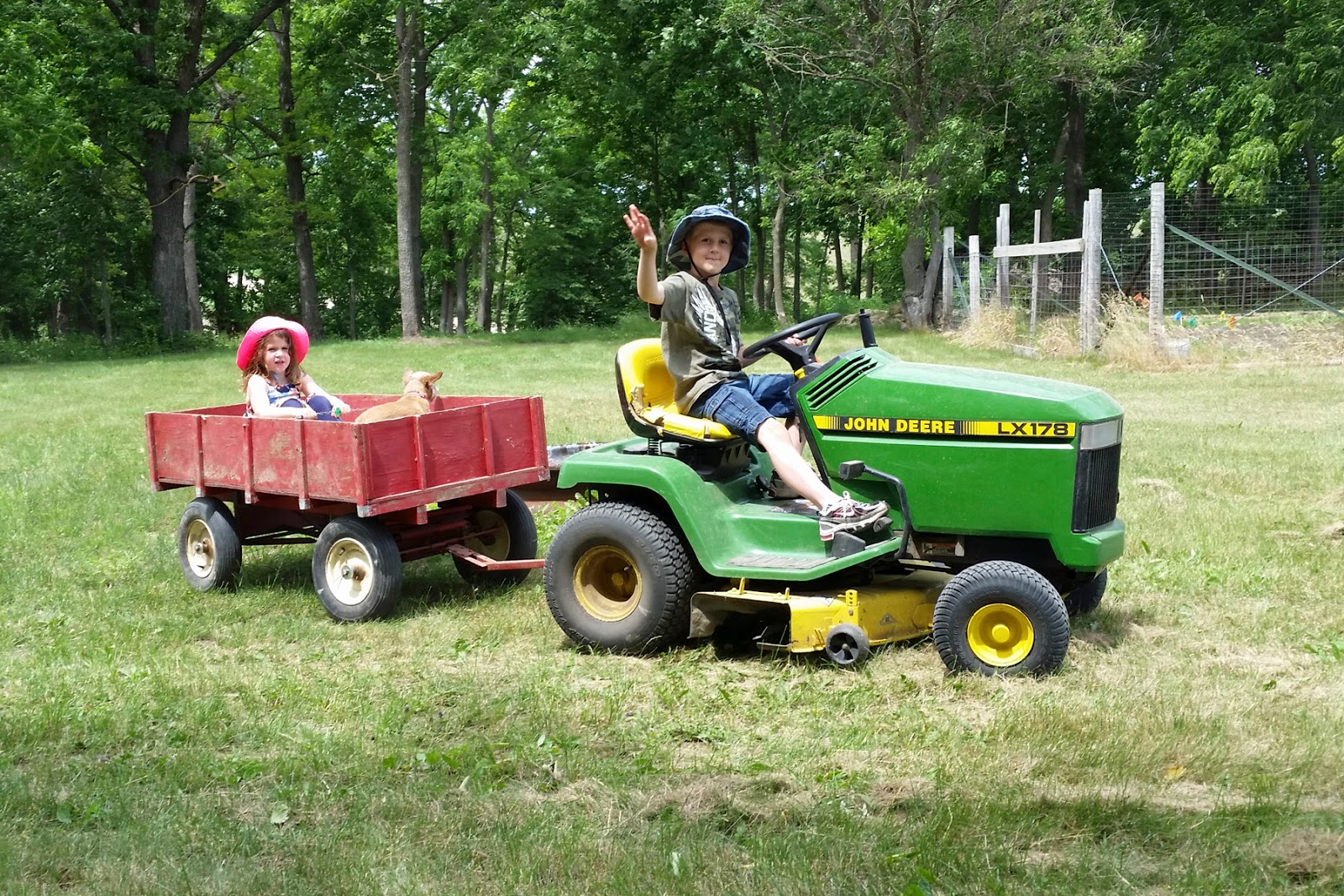 On Sunday, we spent Father's Day with my dad's side of the family. My aunt and uncle run a dairy farm not far from my parents and they hosted the event. I'm pretty sure it was the first time Annaliese had been that close to cows before, and she was a bit timid, but so was Ian, who has been there at least once before (but that was probably a few years ago and he may have forgotten...).  It's amazing how far farming has come from when I was a kid and helped milk during the summers. They have 6 robots that now do it- no more squatting down and possibly getting kicked. More than that, there are computers that drop the feed and clean the alleyways, and they have a system that presses all the liquid out of the manure, removing the smell, and that becomes the bedding the cows lay on.  I just marveled at the whole operation. 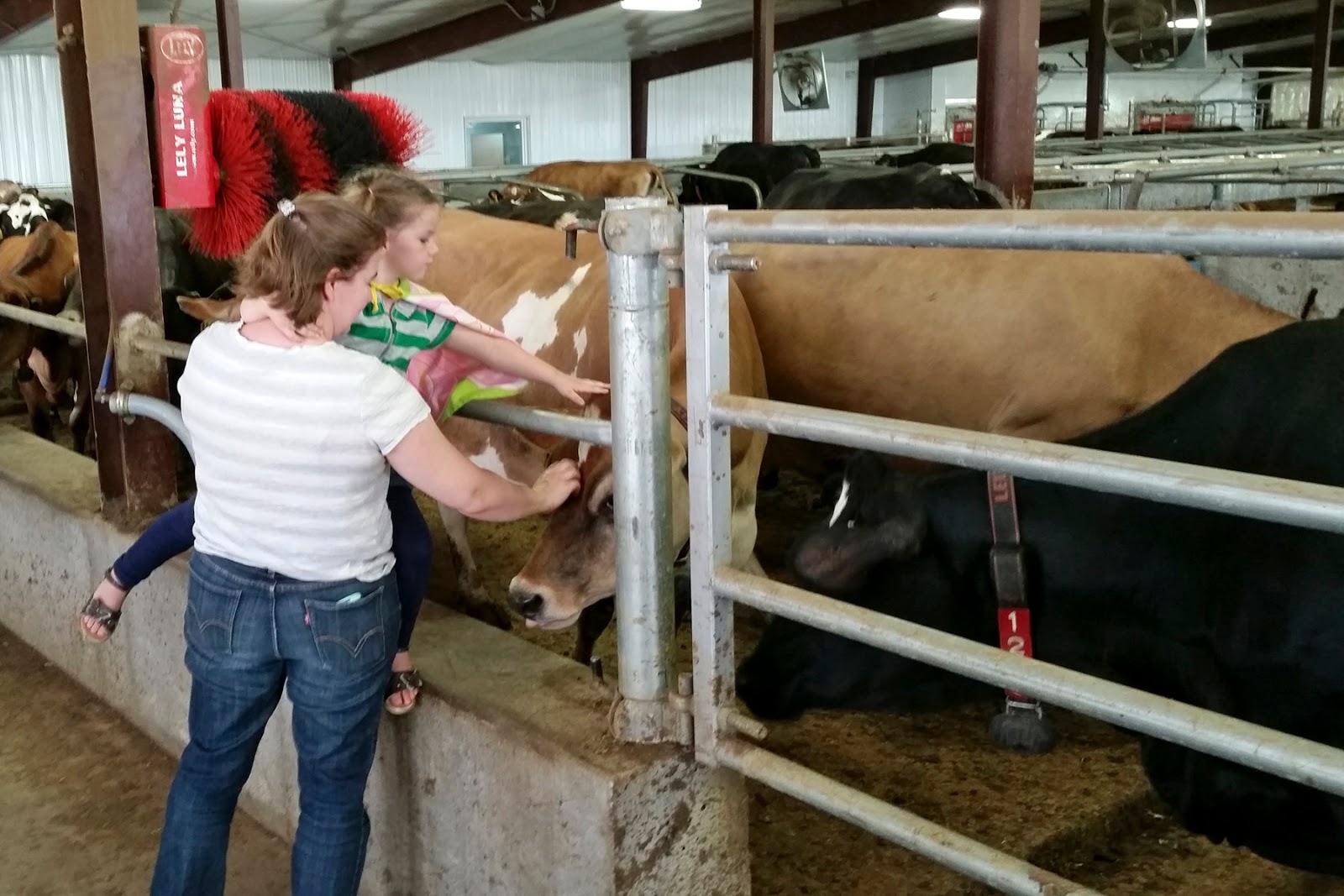 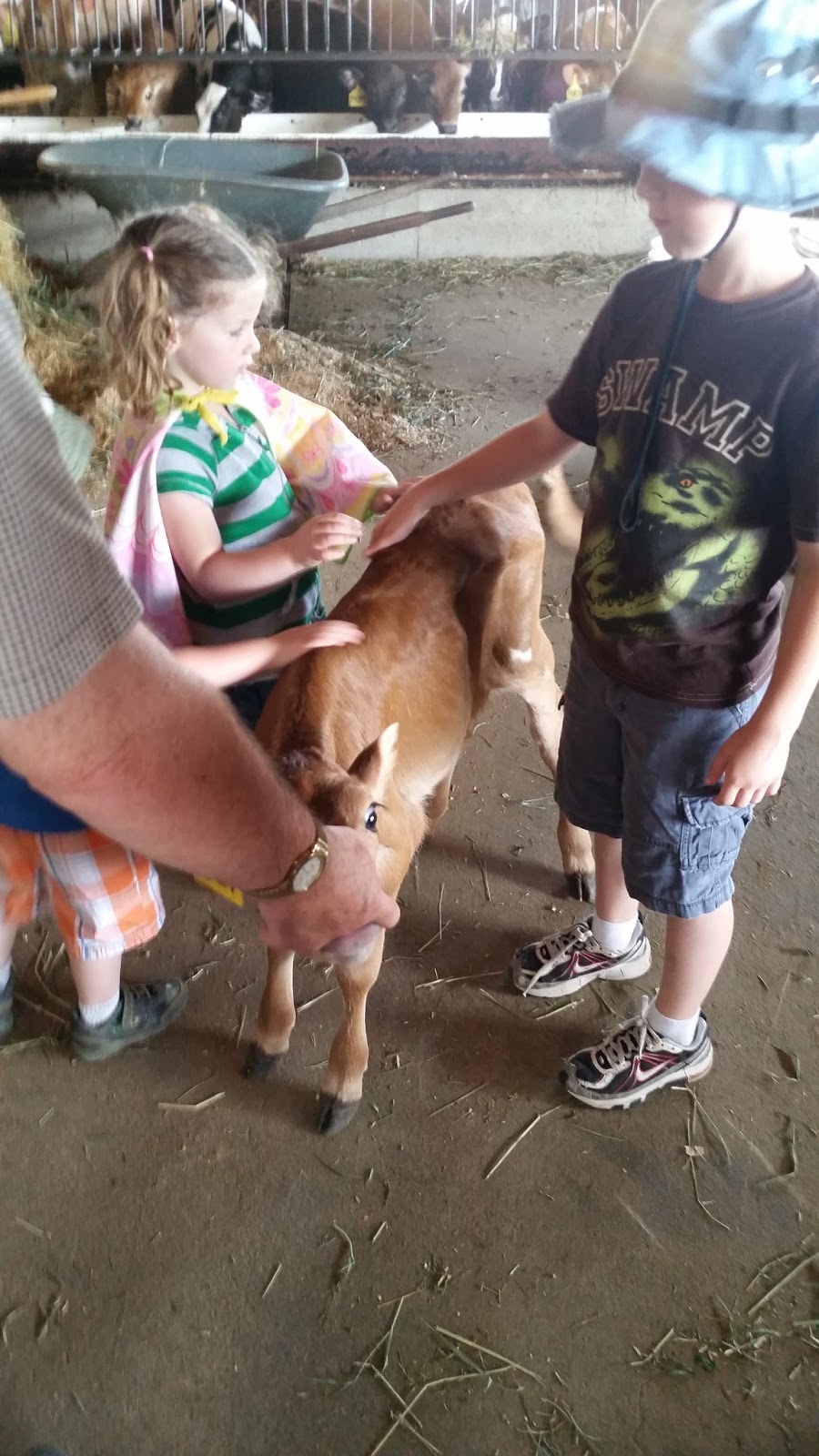 Love trips back home!
Posted by Colleen at 10:08 PM