Today was a perfect day...well... almost. Ian woke us up at 6:30 this morning. When is he going to learn that you sleep in on the weekends? After three bowls of Cheerios for breakfast, he decided to try out my shoes this morning, and he did surprisingly well walking in them. 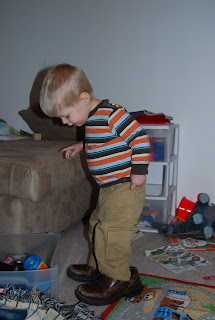 I left for sewing Saturday at Marlena's, though not before giving Ian a haircut. While I was hard at work on my ocean waves quilt, Ian was soaking up the sun outside with Darrin. Notice that it's February in Nebraska, and we have NO snow. That's thanks to the 50-degree temperatures we've had lately. 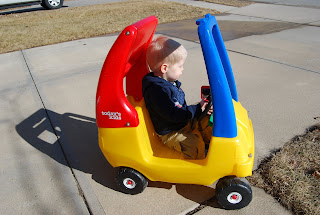 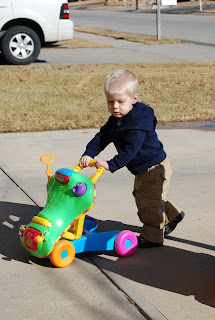 Darrin and Ian joined me at Noah and Marlena's for Ian's birthday party. The food was great. 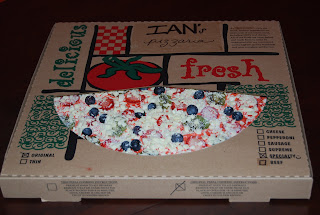 Don't let the picture fool you. We had brats on the grill for supper. That was actually Ian's cake! They baked a cake in a pizza pan, topped it with frosting for sauce, and the rest of the toppings were strawberries, kiwi, blueberries, and white chocolate. Yum! 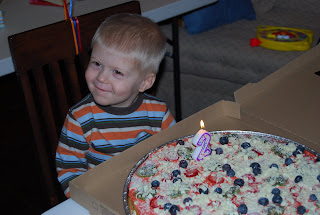 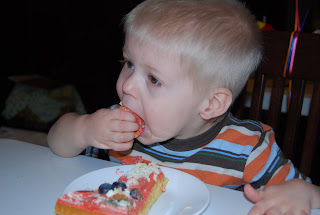 After the food, it was on to presents. Ian loved his balloons, though he enjoyed hitting them around the room more than he enjoyed having them clipped onto his pants. 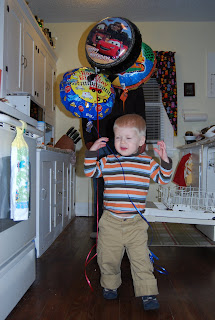 He had more fun ripping the paper off of the books, clothes, and Leap Frog fridge magnets he got. 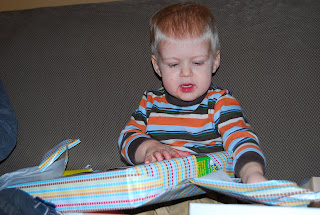 As I was rocking Ian before bed tonight, he kept singing, "Happy Two." I can't believe my little guy is almost two.
Posted by Colleen at 8:31 PM

What great pics. I love the cake

I can't wait to see him for his birthday party. Love the pics. Give him a hug and kiss for me.

Looks like a wonderful day and perfect weather. Oh, btw ~ you won the give-away on my blog. drop me an email with your snail mail address and I'll get your package in the mail asap. Thanks for playing.