Tonight we frosted the sugar cookies. After taste-testing the frosting, Ian said, "That GOOD!" It was so spontaneous, loud, and hilarious. We showed Ian how to frost his cookies and put sprinkles on top. I think he got three frosted before he got sick of us taking them away from him. Before we could grab the 4th away from him, he stuck it in his mouth. After tasting one of my own, the frosting tastes fabulous, but I think I'm going to have to find a different sugar cookie recipe. Could be that I made them wrong, too, because this was a first time thing for me as well. 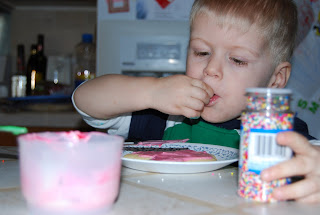 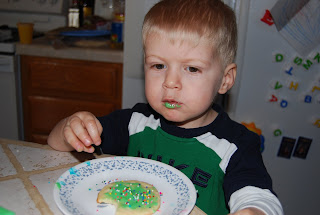 We met Darrin for lunch today at the Olive Garden. Darrin was running behind, so we killed some time at the quilt store. Ian was a good boy, so I bought him 2 fat quarters of farm fabric. Hopefully tomorrow I'll sew them together and whip up a quick little blanket for his stuffed animals.

Knocked a few more things off my to-do over break list. I finally finished Sara's present. I forgot to take a picture it, so hopefully tomorrow. I also sorted through all of Ian's clothes and boxed up all the 18 months. It's so sad putting some of those away; he was so cute in them and he won't wear them anymore. I read The Quilter's Kitchen- definitely my least favorite Elm Creek Quilt book. Each chapter was only about 5 pages long, followed by 15 pages of recipes. There wasn't much story to it at all, which is pretty much why I disliked it.
Posted by Colleen at 7:34 PM

Ian is so cute frosting the cookies! I hated The Quilters Kitchen too. I had it read in under an hour. I'm so excited that the Lost Quilter comes out this month. I have it on order.

Such cute photos! Making memories with the little ones, can't beat that!
Kristie