and says the cutest things. In the last 1.5 hours I've been home from work, he's said the following things:

While eating supper tonight, his piece of bread had a hole in it. I told him that air put it there. He responded to that with, "Or maybe a mouse."

During bath tonight, he said, "I want to stay in a bit longer." Darrin replied, "Or you could play with Mack." That was followed by an immediate, "GET ME OUT! I can't wait to play with Mack!"


And for those of you who just read the previous one and thought, "Mack? Who's Mack?" That would be Mack, the semi-hauler for McQueen from the movie Cars (a.k.a. the early birthday present Ian got because Darrin accidentally left the hiding place open and Ian saw it). So tonight, Ian went over to where we had hidden it and said, "Hmmm, anything else in there?"-opened then door, and said, "Nope!" 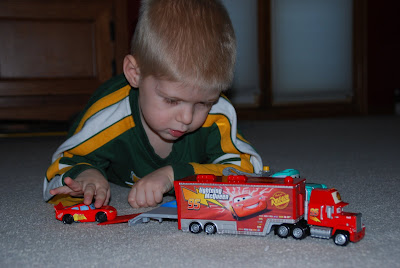 Yesterday Ian came home from day care in a pair of Ava's purple pants. We tried to snap a picture because he looked so darn cute in those purple pants, but he wasn't much for it. This was the best one we got: 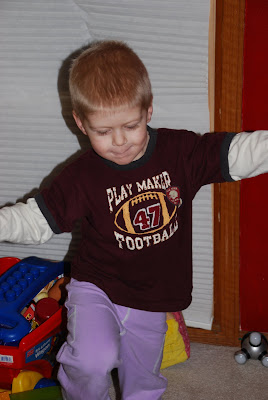 He sure is a cutie. The perfect age for all things fun.